Draft weekend is over. It’s sad times in the lair. I guess it’s back to binging super hero movies until fantasy season picks up for us keyboard warriors. But before we go open Disney+, here’s some grades. Remember, I did an analysis of each pick of the first round already.

The Bills seem to have sat there and just let the draft come to them. The Rousseau pick was solid and I love the Carlos Basham pick at the end of the second. He’s a good value at 61 overall and doubling up on pass rushers will forever and always be a sound strategy. Taking Spencer Brown and his freak athleticism at 93 is a good move as well. He won’t be rushed into the lineup but in 2023 when Josh Allen’s extension kicks in Daryl Williams may easily be a cap casualty.

Buffalo sort of cleaned up in the 6th, nabbing three values. I really like adding Marquez Stevenson’s speed. What I don’t understand is not addressing corner until Rachad Wildgoose later in the 6th or the interior of the offensive line until Jack Anderson in the 7th. Realistically, neither counts as addressing either situation. I’m not begging the Bills to needs based draft but this team has Super Bowl aspirations and the clock is ticking on having Allen for uber cheap. Next week teams can begin signing players without it affecting the compensatory pick formula so we’ll see how teams like Buffalo navigate filling out the rest of their roster.

I was fairly in the ballpark predicting the Dolphins draft. Ok, I ended up projecting the wrong Alabama receiver at 6 but for some time I projected an edge at 18 citing Grier’s tendency to draft for positional value. Once upon a time I even put Jaelan Phillips himself at 18.

Unfortunately in my final mock draft I went against my own intuition and gave Miami JOK at 18 thinking Flores would just view him as a weapon. Nevertheless, I had the Dolphins using their 3rd pick on a safety, though I figured it would be Trevon Moehrig. I then had them coming back with their own second rounder to taking an offensive tackle.

Miami opted for Jevon Holland over Moehrig and while Moehrig did seem to be the consensus top safety, I’m not even going to factor that in. If the Dolphins prefer the Holland (they clearly do) then that’s fine. I really like Holland as a prospect as I believe him to be versatile and assignment sound, so no wonder Flores was interested.

I just cannot get over this trade up for Liam Eichenberg. The Dolphins should be investing in the offensive line, but they shipped off their 2022 third rounder to move up eight spots from 50 to 42. Eight! They eventually sold their 5th rounder (156) to the Steelers for a 2022 4th so that helps, but this is ridiculous. Even if Eichenberg didn’t make it to 50, which he very well could have, Samuel Cosmi and Dillon Radunz ended up going 51 and 53, respectively. The odds on who ends up the best out of the trio is more or less a wash. When you hear talk about not being overconfident in your own evaluation and trading up for non-quarterbacks is bad, this is exactly what it’s referring to.

Miami came back in the third with Hunter Long who profiles as a reliable all-around tight end and figures to allow Gesicki to be more prominently a receiving threat.

After swapping out of the 5th for a future 4th the Dolphins weren’t up again until the 7th where Dolphins Twitter finally got the running back they’ve oddly been clamoring for since the day after the regular season.

The five players Miami actually took on the first two days of the draft is doing a majority of the lifting for this grade. They didn’t knock any of these picks out of the park and the Eichenberg trade is absurd. I’m also not quite sure why only the Bengals are drawing scorn for selecting a receiver over Penei Sewell, and the Dolphins are apparently just immune to the same criticism. I think the Bengals made the right decision, and I’m not downgrading Miami for choosing Waddle over Sewell, but there’s a much better argument for taking Chase over Sewell as there is to opting for Waddle over Sewell so I just don’t understand why this has never once been mentioned.

The Patriots held their ground in the first round and let Mac Jones come to them. I truly believe they should have gotten aggressive and went up to get Fields. However, they got an appropriate value on Jones.

The Christian Barmore pick is getting plenty of hype because of who they selected, and I get that, but I hate the trade New England made in order to make it happen. Maybe it doesn’t matter when you’re getting a top 15-ish player in the second round. The Patriots shipped off 46, 122, and 139 for the right to take Barmore at 38. That is a bounty to move up eight spots in the second. Barmore at 38 is a great value and he’s a long term play, but the New England has the worst group of receivers in the NFL and for the second consecutive season straight up passed on a loaded receiver class. I would have rather spent 46, 122, and 139 on three receivers to maximize the odds at least one of them panned out. Besides, who’s to say Barmore wouldn’t have slid down to 46 anyway?

The Patriots got a potential steal of the draft with Ronnie Perkins at 96. If Perkins had gone in the second no one would have batted an eye and New England took him at the end of the third. They then immediately followed it up by completely wasting their 4th rounder on running back Rhamondre Stevenson. The Patriots already have a crowded running back room and, oh yea, where the fuck is the receiver? Plus, after throwing away two 4th’s to go up for Barmore you’d think maybe New England would have traded down from 96 or 120 in order to recoup some picks. You thought wrong.

I really, really like Cameron McGrone in the 5th and also think Joshua Bledsoe in the 6th is good value. The Patriots walk out of the draft with their future at the quarterback position, a potential disruptive force on the interior, and a steal of an edge rusher. That’s pretty good, but the name of the 2021 draft for New England is missed opportunity in my opinion.

After the awful trade up the board to 14 in Round 1 it seemed fairly likely New York would fall back from 34 in order to recoup some of those picks. That didn’t happen. However, I can’t really fault the Jets for just taking Elijah Moore. Moore had late first buzz and figures to be a great fit in Mike LaFleur’s new system.

New York just showed everyone how to approach drafting a running back. Snagging Michael Carter at the beginning of the 4th is how you do it. That’s the appropriate time to start looking at the position, and Carter is an elusive athlete who is dynamic in the passing game. The Jets then spent five consecutive picks across the 5th and 6th rounds drafting defensive backs, which I really respect. Both Jamien Sherwood and Hamsah Nasirildeen represent good values as well.

This B- is teetering on a C+ as I really, really hate the Alijah Vera-Tucker trade. New York came away from Days 1 and 2 with Vera-Tucker and Moore as support for Zach Wilson, which is fine a vacuum. But when you compare it against the missed opportunity to come away with Christian Darrisaw, Moore, and like Jalen Mayfield (to kick inside to guard) and then their favorite receiver or tight end at 86 (or using some of those 5th’s and 6th’s to go up a little and get someone they really liked) it’s hard to be over the moon about this draft.

The Jets had one of the best Day 3’s. Running back Michael Carter is excellent process and just throwing darts at the secondary is as well.

Ultimately this draft classes hinges on a dude who spent the first night of the draft getting ready for prom. 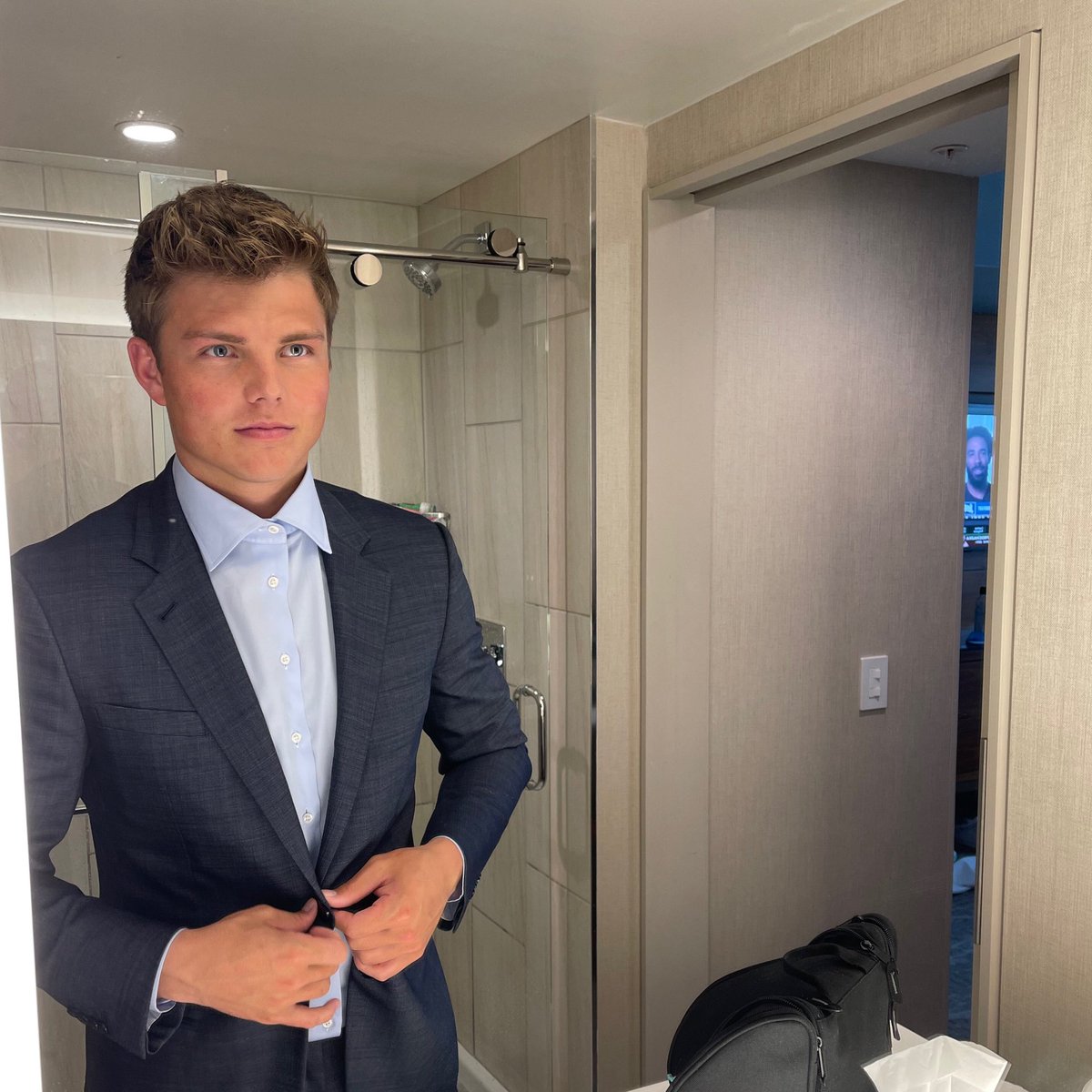