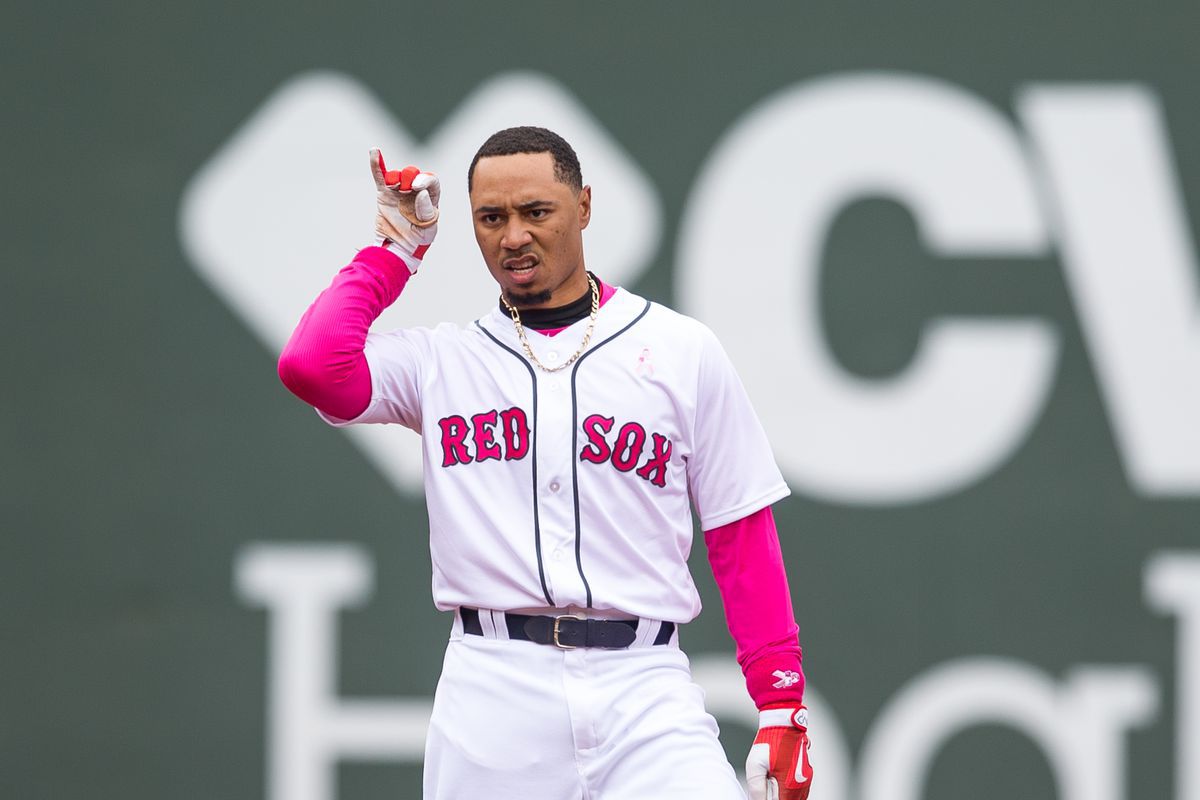 This year I have the privilege of participating in The Great Fantasy Baseball Invitational (TGFBI).  TGFBI is a conglomerate of industry leagues, 13 in total, run by Justin Mason of Fangraphs.  Every league is chock full of fantasy baseball analysts, some of whom have national prominence, and (in my case) some of whom you’ve never heard of.

Each league is composed of 15 teams with rosters of 28 active players (14 hitters, 9 pitchers, 5 bench) and 5 available DL spots.  The scoring is standard roto (R, RBI, HR, AVG, SB, W, SV, K, ERA, WHIP) and while lineups are daily, waivers are processed on a weekly basis with each owner having a $1000 FAAB at his disposal.

My strategy going into the draft for hitters was to concentrate on multi-category players and to stay away from 1-dimensional sinkholes like Billy Hamilton or Joey Gallo.  Ideally I would be able to nab guys with power AND speed in the early goings of the draft so that I’d have a solid base built and additional flexibility in the later rounds.  I also hoped to have a balance of established, “reliable” hitters, as well as some hitters with substantial untapped upside.  It’s difficult to win a league without having at least a couple guys outperform their draft position; I hoped to take calculated risks by “reaching” on certain players during the draft.

As for pitching, my MO has always been to severely devalue SPs and make value picks late in the draft and work the waiver wire in-season.  I fully embraced this strategy, as you will see.

Now that the slow draft has been completed, it is my intention to take you through each of my picks while also explaining my rationale along the way.  Hopefully this will be helpful to anyone who has not yet drafted.

Now, onward to the picks!

This was the easiest pick I made all draft. The only two players I would take over Betts are Mike Trout and Jose Altuve.  Betts is the whole package; power, speed, and average in a good lineup.  I fully believe in a “bounce back” year from one of the most talented young players in the game.

I had my sights set on Jose Ramirez or Francisco Lindor, who are well-rounded five category contributors. Unfortunately, and to my surprise, Ramirez was off the board with the 16th selection, and Lindor was selected at 20.  I was left choosing between Donaldson and George Springer.  I really like what Springer did last year, and I believe in most of his improvements, but ultimately I went with the better hitter in Donaldson.  I was happy to take Donaldson at a discount after he spent some time on the DL last year, and given his track record this felt like a safe, un-regrettable pick.

This was my first “reach” in the draft, but given Buxton’s ceiling, and the fact that he was not going to make it back to me, I snagged him. By Statcast sprint speed Buxton was the fastest player in baseball last year and he’s also a very good baserunner:

Needless to say I’m taking the over on all of Buxton’s SB projections, and I firmly believe if anyone is going to jump into the Dee Gordon/Billy Hamilton level of base-stealing, its Buxton.  If he gives me 20+ homers and 30+ steals I will be very happy with this pick.  The potential for more than that is icing on the cake.

The early middle rounds are a weird time for me.  SPs have already begun flying off the board, and I don’t see the value in a lot of the hitters being selected.  For example, Anthony Rendon went a couple picks after this selection.  Rendon is a very good hitter, but given the scoring settings, and the depth at 3B, i think the question of will Rendon return 4th round value is legitimate.  Kimbrel at 10 picks below his ADP is a steal in my mind. As far as closers go, Kimbrel is a guy you don’t have to worry about losing his job.  Also, the dude posted a 16.43 k/9 in 2017.  Ridiculous.

Knebel was dominant in 2017 with a 14.92 k/9 and a 2.53 FIP, and at 20 spots below his ADP this was a relatively easy selection.  Barring injury I should get a combined 200+ Ks from Kimbrel and Knebel.  Grabbing these two early will minimize the need for me to chase saves on waivers, which besides being something that I hate doing, will allow me to allot more FAAB dollars to SP and hitters.

My second real “reach” of the draft, Moncada is a power/speed/upside guy that I just couldn’t resist. Initially I had my sights set on one of Ozhaino Albies, Chris Taylor, or Moncada for this pick, with Albies being my first choice.  Neither Albies nor Taylor made it back to me.  Fangraphs’ depth chart projections call for 18 home-runs and 22 stolen bases from Moncada in 2018 so I will be happy if he reaches that type of upside.  Moncada struggled initially after being called up, but finished the season on a high note with a triple slash of .276/.349/.469 in Sept/Oct.  While I don’t expect him to reproduce these numbers over a full season, they hint at his upside.

Finally, I nab my first starting pitcher in round 8.  By fWAR Price projects as the 26th best pitcher in 2018 with 175 projected innings pitched.  From 2014-2016 Price average over 230 innings pitched per year.  My line of thought is similar to Fangraph’s Jeff Zimmerman:

“His ADP was just getting hammered too much for his injury.  It’s still a concern but Price reports his elbow is 100% healthy.  He’s been falling in early drafts and I already have a few shares of him.”

There’s some risk to Price, but I think he can bounce back to being a top 20 SP.  At pick 114 I like my chances of getting positive value.

[…] Last time around I introduced you to The Great Fantasy Baseball Invitational (TGFBI) and we reviewed my first eight picks.  For convenience’s sake here were those picks: […]