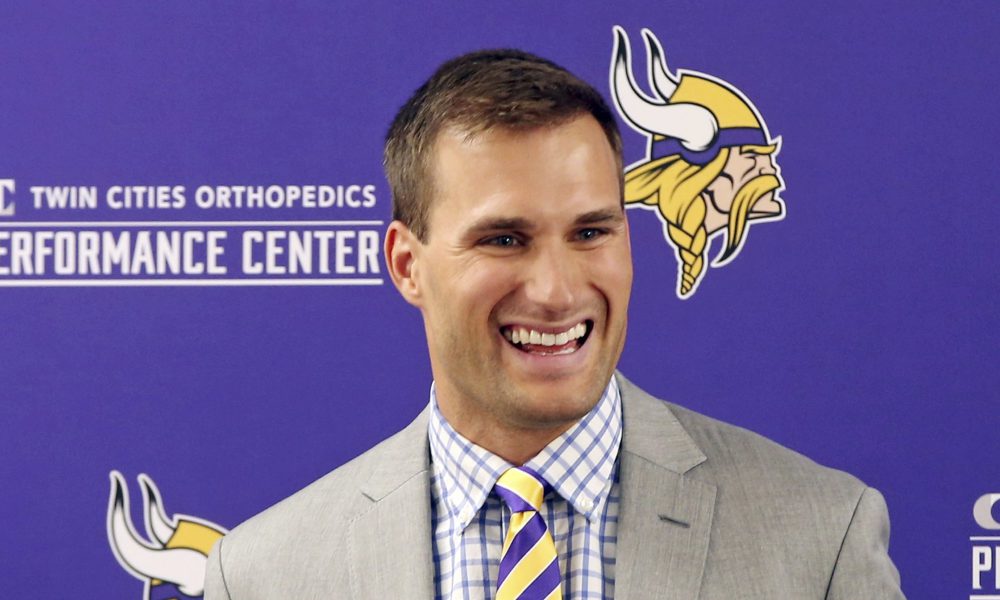 Welcome to the 2018 NFC North preview.  This is the 6th installment in our 2018 NFL preview series.  If you haven’t had a chance to check out the earlier editions, be sure to catch up on all the action.  In these capsules we will make a prediction against each team’s Vegas win total, take an in depth look at the rosters, and make overall division predictions at the end.  The order in which the teams appear is what we are predicting as the final divisional standings.  Onto the 2018 NFC North preview.

I’m not going to spend any time breaking down Aaron Rodgers, but he was the major factor in picking the Packers over the Vikings to win this division.  In my mind these two rosters even out, so I’m taking the quarterback.  The other factor was that Green Bay is slated to play the 11th easiest schedule, where as the Vikings are looking at the 14th toughest schedule.

According to ProFootballFocus, Rodgers will be protected this year by the 9th best offensive line in football, health permitting.  That bodes well for this ground game, where we don’t exactly know who is going to emerge as the leading running back.  That is ok, because out of Jamaal Williams, Aaron Jones, and Ty Montgomery, there is enough talent to consider this group a positive.

I think the passing game weapons are a bit overrated.  Adams is really good, but outside of him who can you trust?  Cobb is very talented but is dealing with an ankle injury.  Foot/ankle injuries tend to be killer if you had surgery on the issue in the same calendar year.  Cobb had surgery six weeks before training camp.  Just something to keep an eye on.

Don’t buy the Jimmy Graham hype.  Graham has now sustained two major injuries in his career and is 33 years old.  We fall for this song and dance every time the Packers bring in some big name tight end.  Rodgers has shown he just doesn’t really utilize the position, and this isn’t the New Orleans Saints version of Jimmy Graham.  Sadly, that man is probably gone.  In Graham’s “bounce back” 2017 season, he finished 24th in DYAR and 23rd in DVOA among tight ends.

Viewed as the weakness of the roster, I think this defense is underrated.  PFF has the pass rush as the 17th best unit headed into 2018.  Kenny Clark, Mike Daniels, and Muhammad Wilkerson will all provide decent interior pressure, while Clay Matthews and Nick Perry will provide decent edge pressure.  Five guys providing decent pressure adds up to a solid unit.

However, PFF has the Packers secondary as the 27th ranked unit in the league, a ranking I strongly disagree with.  I understand being skeptical of units leaning heavily on youngsters, but I happen to believe in all the youngsters.  Over the past two drafts the Packers have invested a first round pick and two second round picks to add three talented corners.  That trio – Kevin King, Jaire Alexander, Josh Jackson – is a very exciting bunch, and I believe in all three individuals.

The team is set at one safety spot with HaHa Clinton-Dix, while at the other spot I like Josh Jones to take a significant step forward in the second year of his career.  Add in Tramon Williams and this is a deep and talented group of defensive backs.  Not only should they finish the year higher than the 27th ranking, but to me this is a strength of the team and they should finish in the top half of the league.  I’m willing to eat crow if I’m wrong, but I like all these guys.

If you have Aaron Rodgers you just start out with a solid chance to get to ten wins.  The offensive line, deep group of running backs, and competent defense against the 11th easiest schedule should be able to propel this team over 10 wins and to a division title.

There is not a single major metric in which Cousins outpaced Keenum last season.  To think Cousins will be an upgrade on what it is that Keenum was able to accomplish last year would be foolish.  Cousins is the better quarterback, and the Vikings have a case for having the best accumulation of weapons in the NFL, but Keenum was an upper tier QB in every advanced measure in 2017.

Minnesota heads into 2018 with the 28th ranked offensive line.  There are major issues here.  Everyone except Reiff is a question mark, and even then Reiff has never been a quality starter.  Perhaps Pat Elflein can take a step forward in his second year, but the right tackle and both guard spots are serious weaknesses.

As alluded to earlier, the Vikings may have the best compilation of weapons in the league.  Diggs and Thielen are the best receiver tandem in football.  Kyle Rudolph is one of the better tight ends, and Dalvin Cook showed a ton of promise before falling victim to a torn ACL three and a half games into his rookie season.

This defense is stacked, and we all know this.  Minnesota has the 9th ranked pass rush headed into the season, and adding Sheldon Richardson to provide interior pressure almost isn’t even fair.  I’ve heard a few people take Everson Griffen as their outside the box pick to win defensive player of the year.

The secondary is loaded as well, as that unit ranks 6th in the league.  Harrison Smith and Andrew Sendejo are perhaps the best safety duo in football.  Xavier Rhodes is a capable #1 corner, and the Vikings decided to invest in a strength instead of address the offensive line when they opted to take corner Mike Hughes in the first round.

The Vikings finished last season 5th in point differential and 4th in DVOA.  They over performed at 13-3 as they had a pythagorean win expectation of 11.7 and an estimated win total of 12.0.  Still, it isn’t a terrible over performance.  Perhaps the downgrade in quarterback play will even everything out to an 11 win season, but hitting the over on 10 should happen.  This offensive line will sink any Super Bowl hopes the team has however, especially in a stacked NFC.

Last year the Lions were who we thought they were.  They ranked 13th in point differential, 12th in DVOA, went 9-7, and had an 8.9 pythagorean win expectation.  The only major difference between last year and this year is the hiring of Matt Patricia, and even then it will only affect the defense as Patricia has smartly allowed Jim Bob Cooter to just run the offense.

Point being, what has changed to expect the Lions to not once again go their annual 9-7?  Nothing.  We all know what Stafford is at this point, supremely talented but too inconsistent to really be a top level quarterback.  The receivers run three deep with Jones, Tate, and Golladay.  The backfield is a mess with Theo Riddick, Ameer Abdullah, Kerryon Johnson, and LeGarrette Blount.  We are 7 minutes away from the deadline to cut down the rosters to 53 players (at the time of writing), which could bring us more clarity.

The offensive line is pretty good, as it ranks as the 8th best line in the league according to ProFootballFocus.  It may be the best offensive line Stafford has ever played behind.  Detroit finished 12th in offensive DVOA last season, and should be right around that mark again, with the ability to challenge for a top 8 spot if Kerryon Johnson has a stellar rookie campaign.

Patricia takes over the 19th ranked defense by DVOA.  Detroit enters the season with the 24th ranked pass rush according to PFF.  The only reliable rusher they have is Ezekiel Ansah.  On the back end, the Lions secondary ranks 12th in the league, and if Teez Tabor can make an improvement in his second year, Detroit will run three deep at corner.

If nothing has really changed, other than a potential head coach upgrade, and the Lions neither over performed or under performed with their 2017 record, doesn’t logic dictate that 2018 will just be a repeat of 2017?

If you’re here for a hot take on how the Khalil Mack trade is going to propel the Bears into contention for the division, then, well, I suggest rereading the name of the website.  For as incredible as Khalil Mack is, it is difficult for a single individual to prop up an entire defense.  Furthermore, offense is more predictable than defense, as defense is more subject to variation and randomness.

That being said, the Bears went 5-11 last year but posted a pythagorean win expectation of 6.2.  Essentially, the Bears pushed on 6.5 wins last season and only improved the roster since last season.

I give Ryan Pace a lot of crap for his performance as a GM, but he did go out of his way to add a lot of talent to this roster.  Most of those moves revolved around ensuring Mitchell Trubisky has every possible advantage.

The parallels to Goff write themselves.  Second year quarterback off a terrible rookie season, old school head coach replaced with a young, progressive offensive mind, loads of offensive weapons brought in during the offseason.  The problem is Goff is the exception, not the rule.  Most quarterbacks that show that horrifically their rookie season don’t dramatically improve over the course of their career, let alone a single offseason.

No, you should never give up on a second year player, but I’m not all aboard the hype train like some are.

But there are now more weapons than Trubisky could ask for.  Pace went out and spent approximately a billion dollars on Allen Robinson, Trey Burton, and Taylor Gabriel.  Trey Burton came in already knowing 95% of the playbook as he moves over from Doug Pederson to Matt Nagy.  The team moved up in the draft to get Anthony Miller, and all reports out of camp are that he has been incredible.

Jordan Howard isn’t flashy, and he can’t catch a cold, but he is just a reliable, quality running back.  Tarik Cohen is a good receiving back.  Holding all of this together is the 13th ranked offensive line in the league.

If Trubisky does take a Goff like career arc in his second season then there is loads of potential for this offense.

Prior to the Mack trade the Bears had the 30th ranked pass rush.  I’m not going to pretend I know how high up the list adding Mack will take Chicago.  A single guy isn’t worth anything crazy like a ten spot jump.  If you want to argue for five spots, sure.  Mack had almost as many pressures last season as Akiem Hicks and Leonard Floyd combined in 2017.  This was a massive weakness for Chicago.

Chicago enters the year with the 16th ranked secondary and could easily finish higher.  The team runs three deep at corner, have a very good safety in Adrian Amos, and second year player Eddie Jackson could improve as well.

I’m again breaking from the fact I don’t normally talk about linebackers to mention the Bears took Roquan Smith 8th overall and he is the perfect modern day linebacker.

Chicago faces the 13th easiest schedule, and as mentioned before, the Bears basically pushed this number last year with John Fox and no Robinson, Burton, Gabriel, Miller, Mack, or Smith.

This isn’t sexy, and Kerryon Johnson and Anthony Miller will have stats to point at by season’s end, but much like Quenton Nelson, Ragnow will have the highest level of performance of any offensive rookie in this division.

Smith is built for the modern game, as he has range against the run and excels in coverage.