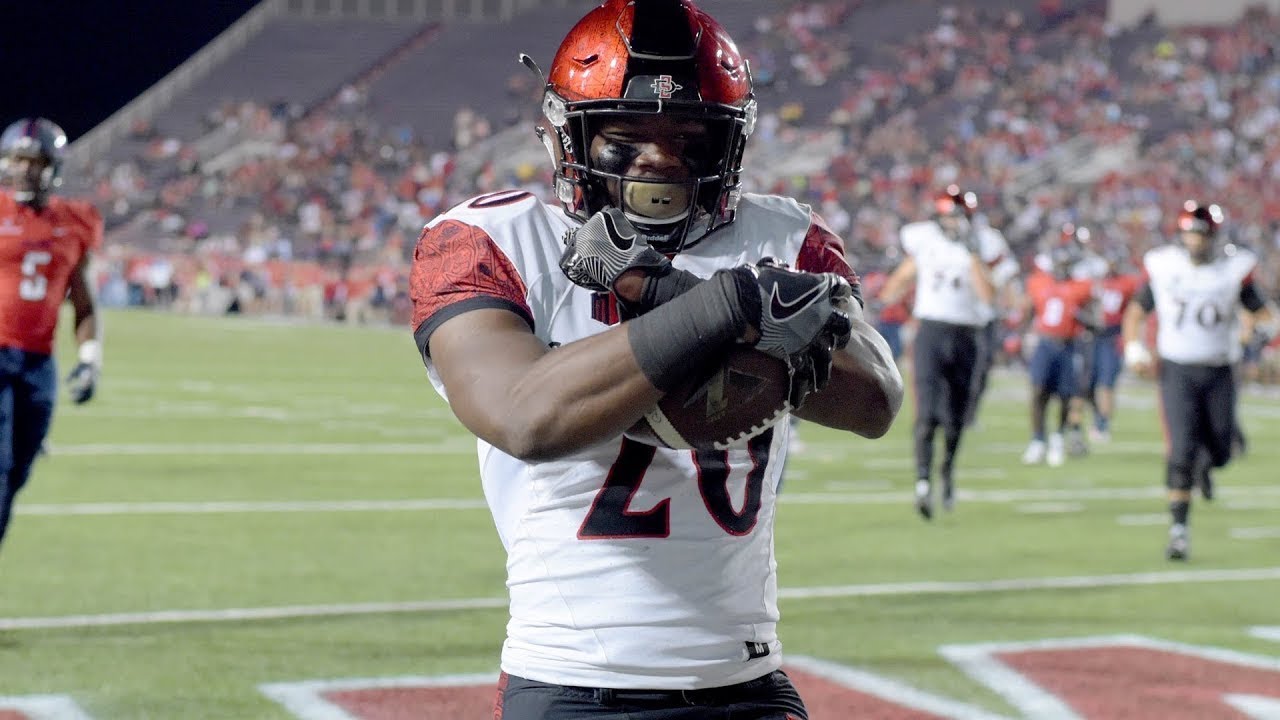 In part four of our eight part series we look into each team’s draft in the NFC West.  If you haven’t checked out our earlier parts, make sure to do so.  I am not going to go too in depth on the first round picks as I already dedicated an entire article to that topic.

There are two big differences, whoever.  First, Jacksonville gave up its second round pick to move up, and Arizona did not.  Secondly, Josh Rosen is a vastly superior quarterback prospect to Blaine Gabbert.  So while Oakland may have been trying to extract more value, Arizona was ready to illustrate a precedent had been set for this trade, and I still think Arizona paid a cheap price to go get their guy.

I didn’t put this in my write up, but I love the landing spot for Rosen here.  The Cardinals will have a solid offensive line if their guys can bounce back to previous career performance levels.  He gets Larry Fitzgerald for at least a year and David Johnson for the foreseeable future.  Perhaps most importantly, Rosen landed with offensive coordinator Mike McCoy.  For all the hoopla about how you need to challenge Rosen intellectually (as if that’s a bad thing) the guy that oversaw Peyton Manning’s record shattering 2013 season is probably fit for the “challenge.”

Apparently Christian Kirk has been friends with Josh Rosen since high school.  The Cardinals followed up drafting their future franchise quarterback by bringing in an explosive playmaker for him to throw to.  Christian Kirk came into the college season viewed as a first round pick.  I love this pick.

Mason Cole can play all five positions on the offensive line.  That versatility will allow the Cardinals to find their best five man group, and put it on the field.  It also helps if there is an injury.

Chase Edmonds is a massive reach, as he didn’t have a draftable grade.  There were plenty of more talented running back options available at the time of this pick.  Arizona did, however, once again try to help surround Rosen with talent, so at least there is a clear plan here.

Arizona strayed from drafting offensive players in the 6th round by taking Chris Campbell to bring in some corner depth.  Corner was one of the Cardinals bigger needs and Campbell is a decent cover guy who fits the range here.

Korey Cunningham didn’t have a draftable grade, but I can understand wanting to lock up a guy at the end of round 7.  The Cardinals once again go back to bringing in guys to protect/support Rosen.

Arizona got their quarterback for what I view as a cheap price.  They then spent most of their remaining picks investing in surrounding Rosen with as much talent and support as possible.  That is how you put together a roster when you draft a rookie quarterback to be your franchise guy.  The Bills should have been taking notes, but they were probably too busy jumping through tables and lighting themselves on fire with the Bills Mafia.  The Edmonds pick was really bad though.

The Rams spent their first two selections on an offensive tackle and a center.  This is not an accident.  Jared Goff was on the verge of getting David Carr’d after his rookie season, so the Rams brought in Andrew Whitworth and John Sullivan.  These two signings, coupled with other factors, lead to Goff’s historic turnaround.

Whitworth is 36 and Sullivan is 32.  The Rams are planning for the future, and planning to keep Goff well protected.

The NFL likes the idea of what Joseph Noteboom could be more than what he is at this moment, but he doesn’t need to play right away, as Whitworth still has two years left on his deal.  The Rams also picked up a late round selection to drop down two spots before selecting Noteboom.

Sullivan signed a new two year deal with the Rams in March, and Los Angeles could get out of the deal after 2018.  Brian Allen can learn on the sidelines for at least one season before becoming the starter.

The Rams are desperate for pass rushers, but I think John Franklin-Myers is a massive reach where they took him.  He didn’t have a draftable grade and he didn’t test well at the combine.  There were better pass rushing options available.

One of those superior pass rush options was Obo Okoronkwo, who the Rams got as an absolute steal in the 5th round.  Everyone expected Obo to go on day two, and I am entirely confident Wade Phillips will turn him into a contributor.

In between those pass rushing picks, the Rams took Micah Kizer, another incredible value in the 5th round.  The Rams needed to replace Ogletree after trading him to the Giants, and Kizer is another guy who should have gone on day two.  Kizer is just a natural football player, and someone who I think will immediately contribute.

Los Angeles decided to upgrade Todd Gurley’s backup with John Kelly, who thinks he is a better route runner than former teammate Alvin Kamara.  I actually really like John Kelly as a late round running back, so another good value here.

Demby was a reach where the Rams took him, as he probably should’t have been drafted.  However, the Rams clearly wanted to invest multiple picks into their offensive front.

The Rams spent the rest of their picks addressing their defensive front seven, mostly in the trenches.  They took another two shots at pass rusher, with Trevon Young fitting the draft range and Justin Lawler being an excellent value as someone who is a PFF darling.

The Brandin Cooks trade looks worse in hindsight, and it was sketchy at the time.  The Rams are going to have to give Cooks a big money contract after this season, and every receiver in the draft was available at the 23rd pick.  They could have chosen their favorite one and had him on a cost controlled deal for the next four or five years.  Of course, any of the receivers in the draft could bust and Cooks is a proven commodity.

I am really impressed with how well the Rams did despite not having a pick in the first two rounds.  They ended up with 11 selections total, and while they did have to trade away some veterans to get later round picks, but those veterans were underperforming on big money deals.

The Rams made it a point to invest in the trenches and the pass rush, which is always a good team building technique.  There was a mix of great values and horrible reaches.  Overall, the Rams drafted talented guys that can contribute to this team.

The 9ers decided to use their first pick to make an investment in protecting their $137.5 million investment.  Sound strategy.

I dislike everything about the Dante Pettis pick.  He was a reach that high, there were better receivers available, and the 49ers made a terrible trade up to get him.  San Francisco shipped out #59 and #74 to get #44 and #142.  They netted a negative 2.3 points of draft capital in the trade, and I definitely wouldn’t want to move down 68 picks later just to move up 15 picks in the second round.  At least Pettis can make an immediate impact as a returner?

No matter how I slice it, Fred Warner was a reach where San Francisco took him.  When the pick was announced my immediate reaction was that it was a horrible pick.  After sitting on it I can understand the 9ers taking an athletic matchup weapon that is sound against the run and in coverage.  At best, however, Warner went only a round too high.

Tarvarius Moore is a tremendous value and a PFF darling.  The 9ers needed a replacement for Eric Reid.

I like taking a lotto ticket in Kentavius Street in the 4th round.  On film he is a second rounder.  A torn ACL dropped his stock to day three, but the 9ers have a potential steal on their hands if Street gets back to his pre-injury form.

Neither Marcell Harris nor Jullian Taylor had draftable grades, but in the case of Taylor it isn’t the worst thing to lock someone up you like in the 7th.

Richie James is a good value in the middle of the 7th round and has intriguing physical tools.

The 9ers made a sound pick in the first, then mixed in some real reaches with some good value, plus a bad trade.  They hit needs and I like the lotto ticket in Street, but after how masterfully John Lynch maneuvered his first draft, I am disappointed in his sophomore campaign.

Not even a solid trade down could save the Penny pick from being an F.  The Seahawks desperately need better offensive line play and to restock their defense but they took a first round running back.

After a small trade down with the Steelers in order to add a 7th rounder, the Seahawks land an edge guy that I really like in Rasheem Green.  He has the same build as Michael Bennett and I expect Seattle to move him all over the defensive line like they did Bennett.

Why draft Will Dissly where they did?  It is at least a full round too high, and Seattle has much bigger needs than backup tight end.

I love the Shaquem Griffin pick.  Not only is it an awesome story that he gets to go play with his brother, but they got a really good value on this pick.  I had Griffin mocked to Seattle in the 3rd round, so to get him in the 5th is fantastic.

I watched every Oklahoma State game this season because of Mason Rudolph, and I still don’t have a great handle on Tre Flowers.  Sometimes he flashes and other times he gets torched, but I can’t decide if it’s really his fault or that he is just trapped in the Big-12.  Either way, he is well worth rolling the dice on in the 5th.

I’ll never understand drafting a punter higher than the 7th round.

I know I said Seattle desperately needs better offensive line play, and they do, but I also don’t think they are too far off.  Adding Duane Brown to Justin Britt and Ethan Pocic gets them 60% of the way there.  They need both Britt and Pocic to improve, but they really just need to fix the right side of the line.

Jamarco Jones is someone I think should have gone on day two, so to get him at the end of the 5th round is incredible value.  If Britt returns to his 2016 performance level, and Pocic develops how I expected when he came out of school, then Seattle will have four solid starters up front.

Jake Martin didn’t have a draftable grade, but at least they swung at a pass rusher I guess.

Alex McGough also did not have a draftable grade.

Seattle traded down twice to recoup some of the picks they sent out in the Duane Brown and Sheldon Richardson trades.  They ended up with nine selections despite not having a second rounder.  They bypassed much more prominent needs to take a running back in the first round, and waited until the end of the 5th to address their offensive line.  They got a steal in the offensive tackle that fell to them, but it took a long time to address the unit and that was the only pick spent on the offensive line as well.

They got good value in Green, Griffin, and Flowers, and also had reaches in multiple spots and wasted a 5th round pick on a punter.