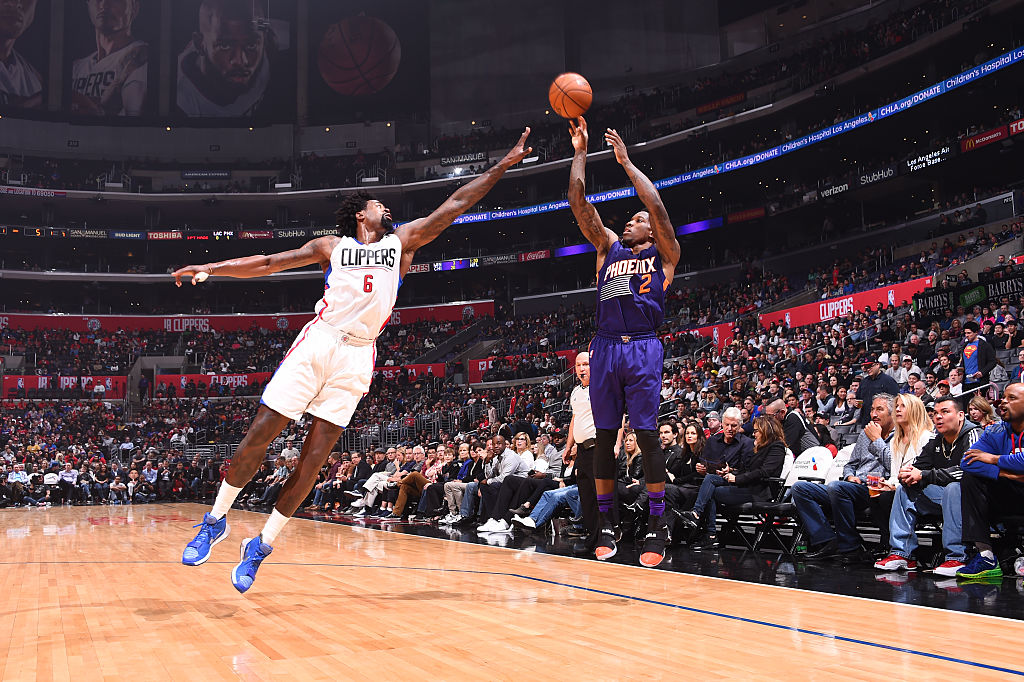 I am a huge Eric Bledsoe fan.  I am not a Bledsoe truther, and I am not going to sit here and tell you he is secretly a top 10 or top 5 point guard.  I do believe, however, that he is top 15 (yes, I do realize this makes him by definition an average starter), and can really help a team that can use his talents.  I have been waiting for the day he was rescued from the Suns and it seems that day is drawing very, very near.  I am going to try to quickly look at possible landing spots and then determine which makes the most sense.

I started with a wide net, trying to capture all possibilities of who might be able to land Eric Bledsoe in a trade. The long list I developed was: Chicago, Denver, Indiana, LAC, Milwaukee, New Orleans and Orlando. After further research I eliminated the Bulls and Magic. I am now going to use this space to speak about why it would make sense for each of the remaining teams to acquire Bledsoe, and what the frame work for such a deal may entail.

Keep in mind throughout that Bledsoe is making $14.5 million this year and $15 million next year, and any team acquiring him must be able to match his salary in a trade.

Zach Lowe does a good job of discussing why the Nuggets should get Bledsoe and how they might go about it in his 32 bold predictions. A simple summary: send Mudiay, Darrell Arthur, Juancho Hernangomez and an unprotected first to Phoenix. The Suns get a free look at a lottery point guard while also gaining an unprotected first round pick in the process.

For Denver, they upgrade defensively and have a veteran point guard to run the show, which is especially more important now that the team has waived Jameer Nelson.

In my humble opinion, the Pacers do not appear interested in hitting the blow-it-up-and-reset button. It has been well chronicled how terrible the East is which leaves openings for teams to get into the playoffs as the 7 or 8 seed. Cory Joseph and Al Jefferson come close to Bledsoe’s salary and Jefferson’s salary is only $4 million guaranteed next season. The Pacers are also equipped with all of their own picks, this the Suns can create more cap space for the summer of 2018 and gain a first round pick. Bringing in Bledsoe gives the Pacers a chance to overtake teams such as the Pistons and 6ers for the final playoff spot.

DeAndre Jordan tweeted for Eric Bledsoe to come home. Milos Teodosic is going to miss a few months at minimum and possibly as many as four. Bledsoe gives the Clippers a combo guard that can create his own shot and hold his own on defense. The biggest issue here is matching the money. Even if the Clippers are able to get a medical exception for Teodosic you can only use that exception in a trade for a player in the final year of his contract, so this won’t help in getting Bledsoe. Unless Doc Rivers is willing to trade Austin Rivers (no shot), I don’t see an avenue to this deal coming to fruition.

I don’t know why the Suns would be interested in a package from the Clippers anyway.  Would they even want Austin Rivers?  The Clippers also owe a pick to the Celtics which could convey in either 2019 or 2020.  This complicates which first round picks the Clippers are allowed to trade in any package going to Phoenix.

The Bucks have been interested in Bledsoe previously and it is already being reported by Marc Stein that they have expressed interest again. The problem is matching the money. Greg Monroe is on an expiring deal paying him $17.88 million dollars so perhaps simply swapping Monroe and Bledsoe while sending picks to the Suns is an option. If the Suns are not interested in such a swap, things get more difficult. The Suns may shift into acting as a dumping ground to take on bad money and accumulate draft picks, and the Bucks do have all of their own picks.

Perhaps the Suns will take the chance on bringing in Jabari Parker, but his contract is only paying him $6.78 million and would require the Suns to take on Dellavedova, John Henson or Mirza Teletovic, which is not desirable. Once again, the Bucks have picks so perhaps they can sweeten a bad contract just enough that the Suns will do the deal. The flip side to that, however, is the Bucks have an impending luxury tax issue on the horizon and may need those picks to move off other bad salary at a later date. This also impacts two other potential deals that match salaries: Greg Monroe, Jabari Parker and picks for Bledsoe and either Tyson Chandler or Jared Dudley. Both Chandler and Dudley have guaranteed money into next season, which will affect the Bucks’ tax bill.

With the Hayward injury, however, the Bucks have a very real chance at having home court advantage in the first round of the playoffs and are perhaps willing to figure out future problems in the future in order to show the fan base it is making progress, being aggressive, and generate extra revenue from an extra home game and potentially extra round.

E’Twaun Moore plus Alexis Ajinca add up to roughly $13.4 million this season. The Pelicans are also equipped with all of their own picks. Taking on Moore’s contract won’t be what the Suns are really hoping for but if the Pelicans can sweeten the deal enough they may just go for it.

Adding Bledsoe will give the Pelicans another ball handler, shot creator, shooter and plus defender. It also provides some insurance in case Rondo suffers a set back in his rehab. I have to imagine both DeMarcus Cousins and Anthony Davis will appreciate seeing the front office being aggressive, which should increase the odds they each want to stay, with more impact on Cousins’ decision, as he is an impending free agent.

I think I can eliminate the Clippers as well as I just don’t see how they are going to match Bledsoe’s salary in any trade. The remaining final four all make sense and none would surprise me, but gun to my head — I am going to go with the Nuggets. They can match the money on Bledsoe’s in a trade, offer a young point guard back, and send an unprotected first round pick which no team in the league is willing to offer in today’s market due to the disaster of the Celtics-Nets trade.

[…] Before the season began, in a puzzling move, the Nuggets waived Jameer Nelson to bring in Richard Jefferson, who has logged a total of 23 minutes this season over the course of four games. The results have been mixed thus far as the Nuggets are operating without a true point guard and were a prime candidate to trade for Eric Bledsoe. […]