The NBA All-Roster voting is closed. We will soon learn who will be a starter in this year’s game. Later, we will find out who makes up the All-Star reserves. The announcement for the starters comes on the evening of January 24th. Keeping up with the spirit of this time of year, let’s break down the 24 players that should be in the All-Star game.

1. Team success is not entirely discounted, but the goal is to find the 12 best players in each conference

2. I do not subscribe to “this successful team should have at least X amount of players,” or “this lousy team shouldn’t get two.” Again, this is a search for the 12 best of each conference

3. I care about your performance over the past 48 or whatever games. I’m not factoring in what you did ever since the last All-Star game or career track record. In the event of a necessary tie breaker, perhaps career track record comes into play.

4. If you’ve missed 20+ games or blew up your organization and demanded a trade, you’re out.

It seems to be unanimous that everyone above except Beal should be an East starter. Some still have Beal as the 5th starter, but others have a different guard.

The advanced stats don’t love Beal. He is 79th in RPM, and 36th in PIPM. You won’t find him on the basketball-reference leaderboards. But he is basically averaging the Kobe Bryant (25-5-5). Among those that qualify for the minutes per game leaderboard, and sporting a usage rate of at least 25%, Beal is 15th in eFG% and 18th in true shooting percentage. More importantly for these purposes, there are only two Eastern conference guards ahead of him on both those lists, and each time it’s Irving and Spencer Dinwiddie.

Beal is posting the best assist and rebounding rate of his career (granted by a small margin). In the minutes he has played without John Wall this season, Beal has a 3.9 net rating, compared to -5.1 with. There is a lot of noise in a data point like this that may make it a statistical fallacy. The point is, Beal has stepped up without Wall, and I think we can all agree on that.

Beal is sporting a 63.4% true shooting percentage in clutch minutes this season on 28% usage. It’s an 80 minute sample, so not much. But no one has a ton of clutch minutes played in relativity to their total amount of minutes.

Giannis is likely the MVP front runner right now, although Harden’s historic run has really made it a two man race. Antetokounmpo is 1st in PIPM, 7th in RPM, 4th in WS, 2nd in WS/48, 3rd in BPM, 11th in OBPM, 2nd in Defensive Box Plus/Minus, and 4th in VORP.

Joel Embiid is a monster. He is somehow overwhelming powerful while being graceful enough to successfully euro-step his way to the basket. It honestly makes no sense. On the season Embiid is 6th in PIPM, 17th in RPM, 10th in WS, 15th in WS/48, and 19th in VORP.

Blake Griffin is the Pistons offense. Stan Van Gundy has shown a willingness to unleash Griffin as a point forward more than Doc Rivers ever did. I suppose it’s a little different when you don’t have Chris Paul on your team. Detroit’s offensive rating plummets 10 points per 10 possessions in the minutes Griffin rests in comparison to when he pays.

Griffin is posting the highest eFG% and TS% of his career on the highest usage rate of his career. On 30.4% usage, Griffin is sporting a 54.7% eFG% and 59.7% true shooting. He is dishing out assists at a 26.5% rate, which is in line with the likes of Steph Curry, Kevin Durant, and Victory Oladipo.

Despite the slump, the advanced metrics still love Lowry. He is 8th in RPM, 16th in PIPM, and has an A or A- in three offensive categories; playmaking, finishing, and perimeter shooting. He is posting an A in perimeter defense, and is 2nd in DRPM among point guards, and 8th in D-PIPM among point guards. Lowry is 2nd in assists per game, 8th in assist rate, and never takes a play off. You just feel his two way impact on every possession.

Kemba is averaging a career high in points per game with 25, and doing so on a 51.8% eFG% and 57% true shooting. He has one of the heaviest burdens in the league, as he is 10th in usage rate on a team that struggles to find offense without. The Hornets offensive rating drops 7 points per 100 possessions when Walker sits.

Pour one out of Victor Oladipo. Here’s to hoping he has a speedy and successful recovery. Oladipo’s shooting efficiency is down but he has stepped up his playmaking. He is posting the highest assists per game and assist rate of his career. He is still the main drive of the Pacers offense and a plus defender. He is 3rd among shooting guards in RPM, and 6th among shooting guards in PIPM.

Oladipo has also been one of the best clutch players in the league this season. He is posting an unfathomable true shooting mark of 80.4% on a 40.2% usage rate.

There’s really seven starters for only five spots; Steph, Harden, Durant, Davis, Jokic, LeBron James, and Paul George. Since we’re constricted to two guards, Curry and Harden are automatics while two of the five front court guys have to come off the bench. This is the definition of splitting hairs. LeBron goes to the bench based off games played.

That leaves one more to bench. I wanted to start George, I really did, but I just couldn’t over the other three. George edges out Davis in both RPM (2nd to 3rd) and PIPM (4th to 5th), but the other metrics scream Davis. Davis is 2nd in Offensive Win Shares, 11th in Defensive Win Shares, 1st in WS, 1st in WS/48, 4th in BPM, 7th in OBPM, 9th in DBPM, and 3rd in VORP.

Steph Curry is a space alien posting a 66.2% true shooting percentage, 4th in the NBA. Everyone around him is a big that spends a lot of their time dunking. Curry shoots 58.9% of his shots from beyond the arc.

What Harden is doing is fucking ridiculous. In clutch minutes, Harden is using a bodacious 47.1% of possessions but still putting up 63.4% true shooting.

As for George, well..

Do you really need me to tell you that LeBron James is an All-Star?

Jrue Holiday is 15th in PIPM and 16th in RPM. Per Zach Lowe, “[t]he Pelicans’ scoring margin improves by 20 points per 100 possessions with Holiday on the floor.”

That is the profile of an All-Star. Change my mind.

This last spot was impossible. They really need to just get rid of the conferences for this game. I wanted to give it to Conley for a life time achievement award. Hopefully Memphis trades him to the Eastern conference.

I finally whittled it down to two finalists for the last spot; Draymond Green and Tobias Harris. Draymond wins the RPM (23rd) and PIPM (13th) battle. Harris wins in WS, OWS, WS/48, and VORP. The two are tied in BPM.

I went with Harris for two reasons. First, it’s hard for me to look at this and not come away thinking Harris is the more impactful player this season. 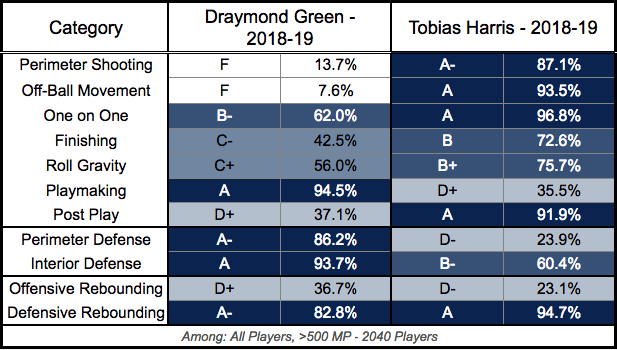 Second, Harris’ offensive burden is clearly larger, and it is the more difficult skillset. His usage isn’t crazy high (23.5%), but it far outpaces Green’s (13.6%). Harris is scoring 22 a game on a 56.6% eFG% and 62% true shooting. Green is clearly the superior defender, but Harris can hold his own on the interior and cleans up the boards just the same.