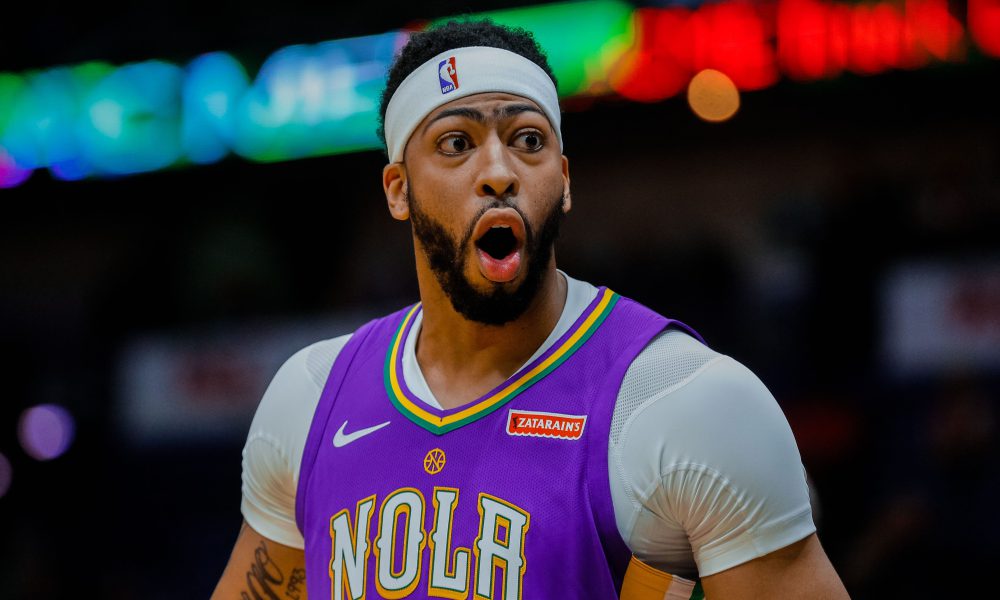 There is light at the end of the tunnel.  The Knicks pathway to a super team is visible and may come as early as summer 2019 (stop laughing).  2019 will mark the third consecutive year the Knicks have their own draft pick, which, given recent history, feels like a franchise record.  New York also has the ability to open up a max contract slot for anyone interested in the leagues largest market or saving New York City basketball.  Furthermore, the Knicks have some young interesting players that could make for an enticing potential trade offer.  The Knicks pathway to a super team exists, and they already have one of the pillars on the roster.

@Rachel__Nichols i cut this completely out of context dont care HIT THE DAMN MUSIC pic.twitter.com/yPcZudwziq

Rachel Nichols and Zach Lowe have a theory (and I need to stress theory here because they always quantify the theory by asserting it is based on zero reporting) that Kevin Durant will end up with the Knicks in the summer of 2019.

The logic is that no one, including those in Durant’s inner circle, really know what it is that Durant wants out of his career.  Should he win a third straight title, and even more a third straight Finals MVP, it’s possible he could look to make one more career change before he is past his prime.

Durant is astutely aware of what his critics have to say about him, and he cares what they are saying.  You don’t defend yourself from a burner account if you don’t care.  He is aware of the opinion that since he jumped on a 73 win team his titles therefore have an asterisks.  Durant heard Rihanna when she said winning your first championship on a 73 win team is like losing your virginity to a hooker.

So, yes, it is possible Durant leaves the Warriors in the summer of 2019 to go a team that is truly “his” and chase a title there.  And if we are going to incorporate how the destination would impact legacy, then what would be more meaningful than returning the city of New York to the top of the basketball mountain? (Plus, if Durant signs with the Knicks he can spend more time in the Hamptons)

Can the Knicks open up enough cap space in order to offer Durant a max contract next summer?  Short answer: Yes.

Considering that next summer there will only be one year left on Noah’s contract, it is entirely possible the Knicks may be able to trade Noah instead of having to stretch him.  Should they find a willing trade partner the Knicks have the ability to open about $44.7 million in cap space in the summer of 2019.

Should Durant sign with the Knicks he would join Kristaps Porzingis, who unfortunately tore his ACL during the 2017-2018 season, but has already established himself as one of the better young players in the NBA.  Given the injury Porzingis may be relegated to only being a 5 moving forward, but that is perhaps the best position for him anyway.

Among players that played in 41 games last season and defended at least 4 shots per game within 6 feet of the basket, Porzingis had the best defended field goal percentage in the entire league.  His sample size is smaller as he appeared in only 47 games, but he ranked 5th in the NBA within the same parameters in the 2016-2017 season.  Again, within the same parameters, Porzingis ranked 9th in the NBA his rookie year.

To cement his ability as a rim protector, consider that Porzingis ranked 4th in the NBA last season in block rate among all players that logged at least 500 minutes.  He was 13th by the same measure in 2016-2017, and 14th his rookie year.

We also know Porzingis has the ability to space the floor, so his time at center shouldn’t compromise spacing.  A career 36% shooter from deep, he topped out last year at 39.5% from the 3-point line, on a solid volume of 4.8 attempts per game before injury.  He also graded as an elite 7-foot perimeter shooter last season:

This past season, only four 7-footers graded out as an A- or better in perimeter shooting:

In the basketball vernacular when we say “super team” what we’re really saying is “team with three stars.”  So how do we get to the Knicks having a third star?

One way is rapid development from Kevin Knox.  Another way is Knox becoming a very valuable trade chip.  Either way, let’s talk about Kevin Knox for a second.

Prior to the draft, critics of Knox would point to his relative lack of production and impact given his natural talents.  His defenders would say that he will flourish once he got to the NBA game and was on a court with real floor spacing.  Then Summer League happened.

It’s just Summer League, but for those that said Knox would blossom with NBA type floor spacing were immediately proven right in the first ever NBA-type environment in which Knox played.  Knox left Vegas with the second highest scoring average, only to be bested by Malik Monk who appeared in just one game.

Simply pointing to this stat is misleading, to be fair, as Knox had an oversized usage rate of 32.9% during Summer League, with poor efficiency: 16.2 PER, 48.1 trust shooting percentage, and 41.6 eFG%.  He did prove adept at drawing fouls though, as he was 6th at Summer League in free throw attempts per game with 6.5.

But everything scouts see as just cause for optimism about Knox’s game – shot creation, unconscious shooting, getting to the rim, leading the break – was on full display in the Knicks game against the Lakers.

Knox was perhaps the second best player on the Knicks during Summer League, however, as Mitchell Robinson looks to be an absolute steal as a second round pick.  Robinson led the Knicks in PER (34.7), offensive rating (145.1), rebound rate (21.3%), block rate (14%), eFG% (66.7), and was second in defensive rating (100.0).  Robinson also for sure led Summer League in ridiculous blocks:

Robinson finished the pre-draft process as the 9th best prospect according to Kevin Pelton’s WAR projections.  Here is what Pelton wrote:

“Along with Billy Preston, Robinson is one of two players in this year’s top 100 projected solely based on EYBL performance. He was fourth in the 2016 EYBL in WARP behind Young, Porter and Kentucky point guard Quade Green. Robinson’s block rate was the best by any EYBL player in a season from 2012 to 2016, his offensive rebound rate was third in that span, and his 73 percent 2-point shooting was tops among players with at least 150 attempts.”

Robinson was dominate at the youth level but never ended up playing at a collegiate program.  The Knicks took a chance on his immense talent in the second round and early indications – again, it is just Summer League – are they will be reaping a reward for taking the chance.

But Knox and Mitchell, along with Ntilikina, could make up a nice trade offer coupled with salary filler and draft picks if the Knicks want to bring in an established star.  Who might the Knicks target next summer via trade?  Anthony Davis.

Everyone in the league will be trying to trade for Anthony Davis come the summer of 2019, so this doesn’t really set the Knicks apart from anyone else.  Still, while I doubt the Pelicans will look to move Davis with multiple years left on his contract, there is a potential scenario where New Orleans is motivated to see what they can get for Davis next summer.

The two major factors are that in the summer of 2019 Davis will still have two years remaining on his contract and therefore should command a larger return than players traded with only a single year remaining, and Davis is eligible to be offered the super-max next summer.  One would assume New Orleans will offer Davis the super-max immediately and given Davis’ injury history no one could possibly blame him for taking the financial security without hesitation, especially after having a front row seat for what just happened to Boogie.

But next summer Davis will be 26 and the designated player extension could only run an additional three seasons beyond Davis’ current deal since there are two years left and Davis does not have a player option for the final year.  Signing the deal would mean Davis committing to New Orleans until he is 31 years old.  It must be at least possible that after another season where the best outcome looks to be a second round exit, Davis reconsiders his situation and ponders what the prospects of winning a title in New Orleans truly are.

Davis may express a desire for a change in scenery and refuse to sign the extension, and New Orleans would receive more in a trade if Davis has two years of team control left.  We know Boston will be able to make compelling offers/they will be making compelling offers.  If Kawhi Leonard takes his talents to Hollywood the Lakers may look to consolidate some of their young pieces into Davis.

The Knicks could build a package around some combination, or all three of, Knox, Robinson, and Ntilikina.  They would also have their own draft picks to add in as well.  The difficulty would be matching salary.  Davis has a 15% trade kicker so his outgoing salary would be $31.2 million, meaning the Knicks would have to piece together at least $24.9 million to send back to New Orleans.

If we include all three young guys – Knox, Robinson, Ntilikina – that’s $10.8 million.  Tim Hardaway’s $18.2 million salary would do the trick (plus, I would assume, at least one first round pick), but New Orleans may not want to take on any salary past the 2019-2020 season.  New York could include Courtney Lee’s then-expiring $12.8 million, but the trade would be about $1.3 million short in salary.  If Enes Kanter and the Pelicans are all amenable, the Knicks could sign and trade Kanter with only the first year guaranteed to finish matching salaries.  Just an idea, but if the teams can get as close as $1.3 million away from a trade that won’t be a large enough obstacle to cause the entire deal to collapse.

So there you have it, the Knicks pathway to a super team is in sight and, in theory, attainable.  This would be a huge win for the league, as not only would it weaken the Warriors but it would make New York basketball not only relevant but a true contender.  Spike Lee might even make a movie about it.