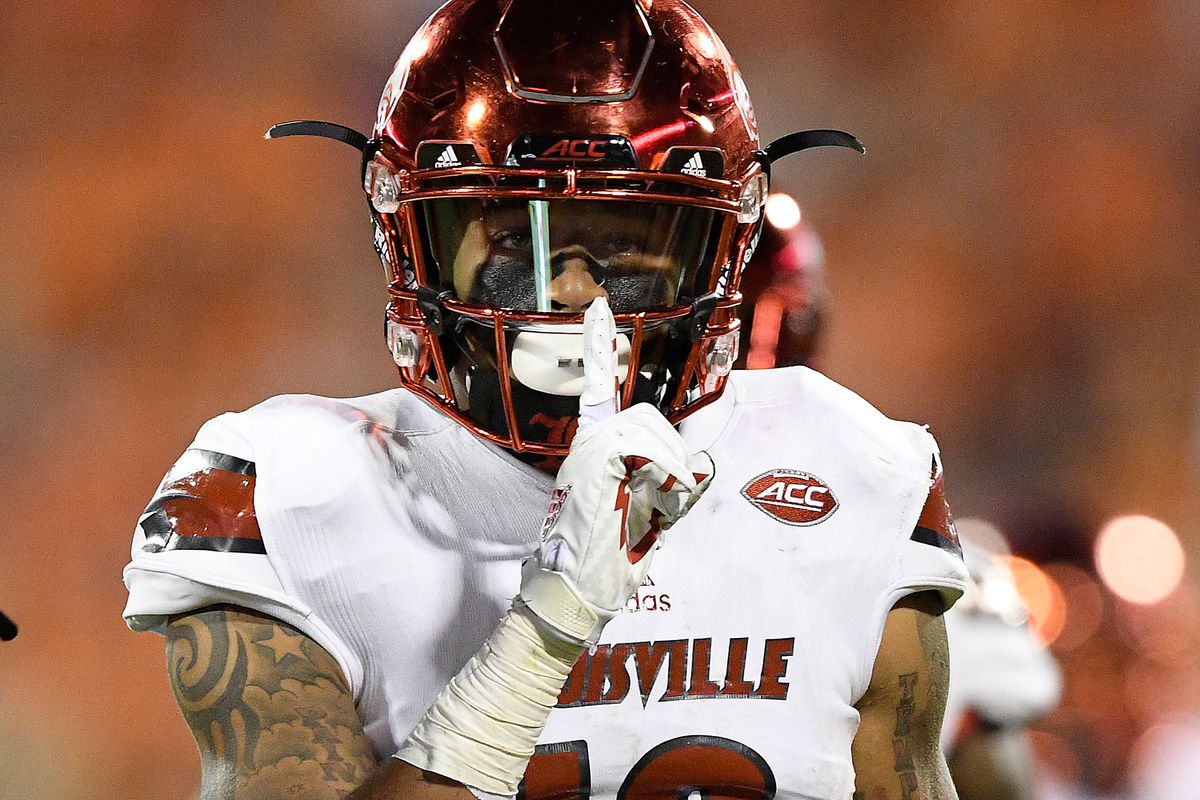 In the second part of our eight part series, we are going to look into how each team in the NFC North did.  If you missed the first installment, be sure to check it out.  I’m not going to go into depth on the first round picks as I already dedicated an entire article to that topic.

Taking Roquan Smith was a matter of taking the best non-quarterback on the board, and Ryan Pace’s job probably depends on the team’s record in 2018.  Smith is plug and play.

Had the Lions or Bengals opted for James Daniels over the interior lineman they chose at #20 or #21, respectively, no one would have batted an eye.  So to land Daniels at #39 is excellent value.  While Daniels is a cheaper option, Chicago has money to spend and had they just retained Josh Sitton they could have gone a different direction with this pick.

I’m pretty sure Ryan Pace knows his job is on the line in 2018 since he mortgaged part of the future to acquire the pick he spent on Anthony Miller.  Chicago sent out #105 and their 2019 2nd round pick in order to get #51 from New England.  Chicago finished 20th in point differential, 27th in FPI, 25th in DVOA, had 5.9 Estimated Wins, and a Pythagorean Win Expectation of 6.2 wins.  The Bears spent a lot in free agency and it is a good bet their first three draft picks are immediate contributors.

Given this projection, the Bears sent out #105, and #42 to get #51.  The Patriots profited 6.2 points of draft capital according to the Chase Stuart draft chart.  The 87th pick is worth 6.2 points.

A lot of people like Miller, and as the draft approached I really warmed up to him.  But giving up this much draft capital to go get him is irresponsible.  I may have taken a couple different receivers that were available above Miller, but it’s not a huge deal that he was their top choice given the options.  The problem is the trade.  I figured the Bears would draft a receiver on day two, but I didn’t envision a trade like this.  Had Chicago just resigned Josh Sitton they could have taken Miller, or Sutton, at #39 and not wildly overpay to move up to the 51st pick.

I don’t think Joel Iyiegbuniwe had a draftable grade.

Ryan Pace’s small school obsession continues with Bilal Nichols.  He fits the draft range and the Bears needed some help along the defensive front.

Chicago looked to add some pass rush with Fitts and he fits the range (no pun intended).

I really like Javon Wims and he is well worth the flier in round 7.

I’m really surprised the Bears didn’t draft a corner at any point.  Marcus Cooper isn’t reliable and Prince Amukamara can’t be trusted to stay healthy.  Their first three picks should all contribute in 2018, but they gave up too much to get Anthony Miller when they didn’t really need another receiver this desperately after the free agent signings they made.  They took some intriguing guys later and blew their 4th rounder.

The Lions opted to increase Matthew Stafford’s protection, and open up more running lanes, by selecting Ragnow with their first pick.

The reason the Patriots were able to trade #51 to the Bears is because Detroit sent #51 and #117 to the Patriots for #43, and the Lions then selected Kerryon Johnson.  The Patriots profited 3.3 points of draft capital in the trade.

Saquon Barkley, Rashad Penny, and Sony Michel all were drafted in round one, and then to begin round two, Nick Chubb and Ronald Jones were drafted in the first six picks.  The Lions decided they couldn’t risk losing Johnson as he was clearly their guy, as I’m sure they rated him much higher than Derrius Guice and Royce Freeman given the aggression they exercised in moving up to secure him.

I think both Guice and Freeman are better than Johnson, and I find it absolutely fascinating that the Lions moved one spot in front of Washington, selected Johnson, Washington then moved down 15 spots, and landed Guice.  I would much rather be on the Washington side of all this.

I hate trading up in general, and trading up for a running back is doubly awful.  Detroit now has a very crowded backfield, although I’m sure the team is going to give Johnson every chance to be the lead back, given what they invested in acquiring him.

What in the world is the Tracy Walker pick?  There are many safeties I would have chosen over Walker, and I am positive Detroit could have moved down and recouped a pick and still landed him.  Not only was Walker not the top prospect available, but Detroit has bigger needs than safety.

The Lions once again struck a deal with the Patriots, this time in order to move up to get Da’Shawn Hand.  Detroit gave up it’s 2019 3rd round pick in order to acquire #114 from New England.  Detroit finished 13th in point differential, 15th in FPI, 12th in DVOA, had 8.5 Estimated Wins, and an 8.9 Pythagorean Win Expectation.  Football Outsiders is projecting the Lions to have the 9th pick next season.

I like taking a chance on Hand.  He was a 5 star recruit who never fulfilled his potential at Alabama, but the upside is there.

Tyrell Crosby is a potential steal of the draft.  I don’t know if the Lions are planning to play him at guard or tackle – I would play him at tackle – but I thought he belonged in the second round, third round at worst.  In other words, he should have gone on day two and the Lions got him in the 5th round.

The Lions took a full back in the 7th in Nick Bawden.

The Lions got some good players, made two bad trades, and found a steal.  They didn’t address their need for a secondary pass rusher/insurance should Ansah leave in 2019 (though they could tag him for a second straight season), nor did they take a tight end which is a massive need.

The Packers maneuvered their way around the first round and left with New Orleans 2019 first rounder and their second rated corner.  Not too shabby.

They then doubled down on the corner position when they got an absolute steal in Josh Jackson.  I thought Jackson was going to be the Packers pick had they stayed at 14 (they obviously preferred Alexander, however) so to get him at #45 is incredible.  In the last two drafts the Packers have added Kevin King, Jaire Alexander, and Josh Jackson.  They have turned a weakness into a strength.

What I really don’t like is the trade that landed the Packers this pick.  Green Bay sent #101 and #147 to move up to #88 to take Burks.  They traded with the Panthers, and the Panthers profited 1.9 points of draft capital.

The Packers threw three darts at the receiver position with J’Mon Moore, Marquez Valdes-Scantling, and Equanimeous St. Brown.  I actually like St. Brown the most, and they took him last, in the 6th, so that is tremendous value.  Moore is a top 20 receiver in the eyes of PFF.  I think Valdes-Scantling was a reach and there are several receivers I would have chosen instead of him.

In between all the receiver picks, Green Bay took Cole Madison, a versatile offensive lineman.  It is never a bad idea to invest in protecting Aaron Rodgers.

Also in between all those receiver picks, Green Bay took punter JK Scott.  I’ll never understand drafting a punter earlier than the 7th round.

Green Bay rounded things out with two guys on the edge and a long snapper.  All three were 7th round picks so I don’t mind just taking guys you like.

I’d had preferred it if Green Bay kept their 3rd round pick instead of moving back up, but they walked away with Alexander and an extra 2019 first rounder on Thursday night.  Getting Jackson, Moore, and St. Brown where they did were excellent values.  I thought they would address their pass rusher earlier than the 7th, and they traded up for an off-ball linebacker, but at least that will let them keep Matthews on the outside I guess.  At least one of those receivers will stick on the roster and I am pretty confident two – Moore and St. Brown – will stick.

I am surprised the Vikings bypassed James Daniels in the first round.  I’m not surprised that instead of offensive line they went corner, as I repeatedly mocked them taking a corner on day two.

The Vikings then got good value at the end of the second with Brian O’Neill, who was projected to go at the beginning of the second or perhaps sneak into the first round in the last three picks with Minnesota, New England, and Philadelphia all needing offensive tackles ahead of the draft.

I liked all three Ohio State edge defenders this year, and Holmes fits the range of this pick.  Both Danielle Hunter and Anthony Barr will be free agents in 2019, so bringing in Holmes as some pass rushing insurance makes sense.

Minnesota also acquired this pick from the Buccaneers, as Tampa sent #102 and #180 for #94.  The Vikings profited 0.9 points of draft capital in the trade.

I think Tyler Conklin is a really interesting prospect and he fits the range.

I think Colby Gossett, who showed really well during Senior Bowl week, is a great value in the 6th.

The Vikings hit, probably, their three biggest needs with their first three picks, and they’re all players I like.  They got good players in Conklin and Gossett.  They drafted a kicker which is, uh, whatever I guess.