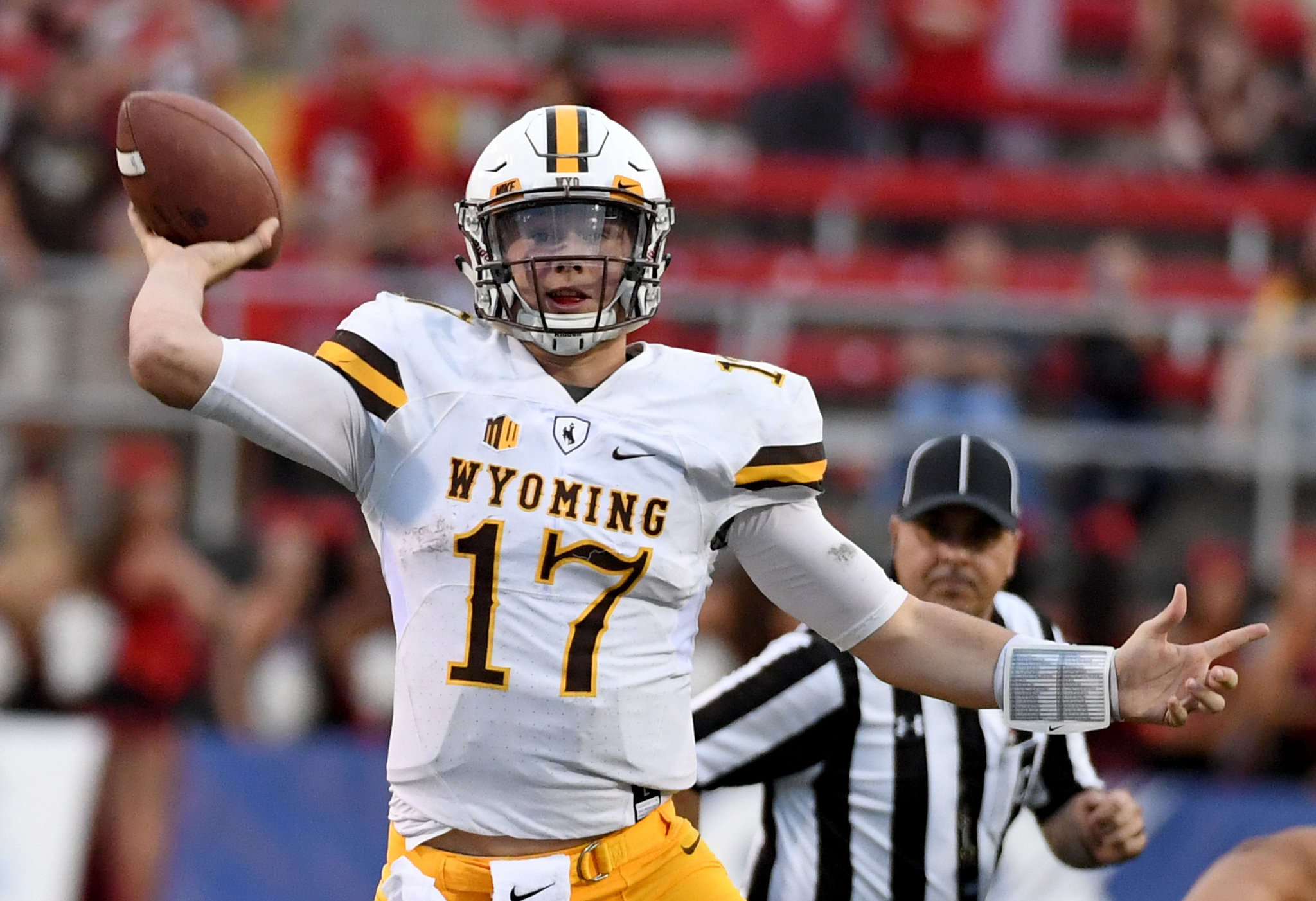 This morning we learned that the worst keep secret in football is, in fact, the worst kept secret in football.  Assuming you don’t reside in housing located under a rock, you were probably aware the Bills desperately want to trade up for a top quarterback, specifically leap frogging the Jets in such a move.  Well, a source said the Bills “are eager to move up in the draft and get into the top three picks.”

In other words, Mr. Gettleman, the Bills are on line one.

The timing of this report leads me to believe that the Bills’ top rated quarterback is Sam Darnold.  Remember that the Jets hastily brought in Darnold for a visit right before the deadline.  Such a move would lead one to believe that the Jets previously thought Darnold had no chance of reaching them, then learned something, and then did the due diligence at the buzzer.  There is a decent chance the Jets have Darnold as the top quarterback on their board.

And the Bills specifically want to leapfrog the Jets.  It seems probable that the Bills agree with the Jets and think Darnold is the best quarterback in the draft, and not only do they want him, but they want to keep him away from their division rival.

Gettleman is in an enormous position of power here.  If the Bills are as desperate as it seems to get to #2, Gettleman could possibly extract a treasure chest of draft capital from Buffalo, or find a trade even more suited to his liking (Mr. Elway, Mr. Gettleman is on line one).

So we know the Bills want to move up, and specifically want to get in front of the Jets.  We also know that Cleveland, barring someone offering four 1st round picks or something, will not trade the 1st pick.  So that leaves the Giants at #2, and Gettleman at least claims to be open to trading.

Teams typically don’t end up making trades where the values on each side are equal in the eyes of the Chase Stuart chart.  In fact, most teams (I’ve read) still use the Jimmy Johnson trade value chart, which we will address in a minute.

What we can do, however, is compare how much draft capital the Bills might have to give up in comparison to previous quarterback trades over the past several years.  I’ve looked more in depth into this before, but for quarterback trades I find to be more useful for creating precedent (defined by number of draft spots moved and where the quarterback was drafted), the comparable trades, and how much draft capital was profited by the team relinquishing the pick, are as follows:

*I had to project where the Jets 2019 second round pick would end up, and deemed a reasonable guess to be the 42nd selection, so the Net Draft Capital is an estimation.

The average amount of draft capital profited by the team that relinquished the pick in these trades is 28.19.  If the 2nd pick is worth 30.2, then, based on the historical average, the Bills need to send the Giants about 58.39 points of draft capital in order to get this trade done.  So, how do we get to 58.39?  Well, given what the Bills have in the first three rounds in 2018, these are the options:

If it intuitively looks insane to you to give up that many picks to get up to #2, you’re not wrong, but if the Bills hit on the quarterback they select they won’t care.  I do, however, believe the Bills won’t want to give up practically every day one and day two pick that they have this year.  Their offensive line is a complete disaster right now following the Cordy Glenn trade, Incognito retirement (?), and Eric Wood retirement.  Whoever gets picked at #2 will probably end up seeing significant playing time in 2018.  Throwing their prized new rookie out there behind perhaps the league’s worst offensive line is something I have to imagine no one in the Buffalo organization is interested in doing.

So we have to consider the Bills 2019 first and second round picks must be made available.  Just like with the Jets, this is going to take some educated guess work to pin down where Buffalo’s 2019 pick will land.

We should also factor in how badly the Bills overachieved in 2017.  The Bills finished 9-7 but had a negative point differential, finishing the season at -57, which ranked 21st in the NFL.  The three teams closest to them in point differential – the Bengals, Bears, 49ers – averaged a record last season of 6-10.

The Bills also greatly outperformed their estimated wins, and pythagorean wins expectation.  Those numbers came in at 6.8, and 6.3, respectively.

Keep these in the back of your mind for a minute.

And again, here is the net draft capital in recent, comparable, quarterback trades:

*Once again I used my Jets projection for their 2019 2nd rounder.

I don’t think Gettleman will accept equal value according to the Jimmy Johnson chart for the 2nd pick because it seems like he really wants to just draft Saquon Barkley.  So the Bills probably have to let Gettleman profit at least 699.5 points or even more toward the 1,017 value.  So what combinations can we make that get us to a total value between 3,300 and 3,600?

In order to get Gettleman to move off his perch I think the Bills are going to have to pony up three 1st rounders, and looking at the math using both value charts, the combination of 12, 22, 65 and the Bills 2019 1st round pick makes the most sense.  Will Brandon Beane be willing to pay this price?  It’s possible, and it probably depends.

Whether or not Darnold is on the board is going to be monumental for what transpires while the Giants are on the clock.  It will probably create a larger bidding war for the pick while also more so enticing the Giants to just keep the pick.  I talked about all the Giants rumors the other day, but it is starting to really look like the only quarterback the Giants will consider at #2 is Darnold.  So even though Gettleman thinks Barkley is so good that his “mother could have scouted [him], she could’ve figured that one out,” maybe during the internal meetings this week to finalize everything a voice in the room emerges that convinces Gettleman that they can’t pass on the opportunity to get Darnold should he be available.

Gettleman has also talked about how you can’t get “too cute” with the second pick.  This was said during an answer to a question about trading the pick.  So, when I talked about the possibility of the Giants taking a massive haul from the Bills, dropping down to 12, and then using some of their extra ammo to go back up to #6 by trading with Indianapolis, we can probably expect that to not happen since that seems “too cute.”

The worst part is it makes all the sense in the world if Gettleman really doesn’t want to take a quarterback at #2.  Gettleman could potentially snag #12, #22, #65 and the Bills 2019 first round pick and have the #65, #66, and #69 picks at his disposal to go from #12 to #6.  The Colts are open to trading down again, depending on how far back they are willing to move.  #12 is interesting for the Colts since there was a recent report that, out of the non-quarterbacks, the Colts see 8 top players and don’t want to fall out of range to get one.  If by the time the Colts are on the clock at #6, it is possible that four quarterbacks will have come off the board, meaning one of those 8 players would have to be available come the 12th pick.  And if at least three quarterbacks go off the board before the #6, which is guaranteed if the the Giants trade the pick to Buffalo (Browns, Bills, Jets take three quarterbacks in a row to start the draft), the one of Barkley, Chubb and Nelson will have to be available at #6 when the Giants hypothetically, come back up.

But let’s not waste any more time on things that won’t happen (even though they should be considered as options).  On the flip side of Darnold being available (should that be the case), considering he is probably the top rated quarterback on Buffalo’s board, they would in theory be willing to pay more of a premium in order to secure him and keep him away from the Jets.

Will Beane pony up three 1st round picks and the top selection in the 3rd round?  Will he even bump up #65 to #56 or perhaps #53 when the pressure starts to mount as the clock ticks down on the second pick?  I think it is possible.  The Bills intentions to move up are well known.  There aren’t many things that I will confidently say I 100% guarantee happens during the 2018 NFL draft, but there is one thing.

On the latest episode of First Draft with Mel Kiper and Todd McShay, the two alternated each pick in the first round and selected the player they themselves would pick in each spot based who was on the board.  There were a few rules, among them there were not allowed to be any trades.  Kiper had the first pick.

As a result, McShay ended up picking for the Bills at both #12 and #22, and selected LB Tremaine Edmunds and RT Mike McGlinchey, respectively.  His commentary regarding the selections was, “I just gave up my left tackle to move up and get a linebacker, I mean what are we doing here?  Can you imagine if you’re a Buffalo Bills fan and you have all these picks, 12, 22, 53, 56, 65, 96, and you end up with a f*cking linebacker and a right tackle?”

So, yes, the Bills might get a little desperate as the clock ticks down while the Giants are on the board, especially if Darnold is available.  They may overreact, or panic, and throw out a trade offer that Gettleman didn’t conjure up in his wildest dreams.  And I think Gettleman really is willing to move this pick despite his history of having never traded down.

Gettleman specifically addressed never trading down in Carolina and said it just kinda never really happened.  He also went into some weird student report card analogy to illustrate how you need to build depth on your roster.  I know Gettleman said you can’t get too cute with the second pick and he wants someone he envisions one day wearing a gold jacket, but if he is thinking about how important it is to have quality depth on a football team, selling this pick off the Buffalo for the largest trade package since the RGIII trade has to at least be really tempting.

We are only three days away from finding out, and I wish I could be a fly on the wall in the Giants war room in two different parallel universes: one where Darnold is available and one where Darnold is not available.  I just want to listen in on those phone calls over speaker phone and see behind the curtain of the Giants, Jets, Bills and who knows who else’s thinking in those 10 minutes, approximately 8:10 pm EST – 8:20 pm EST.