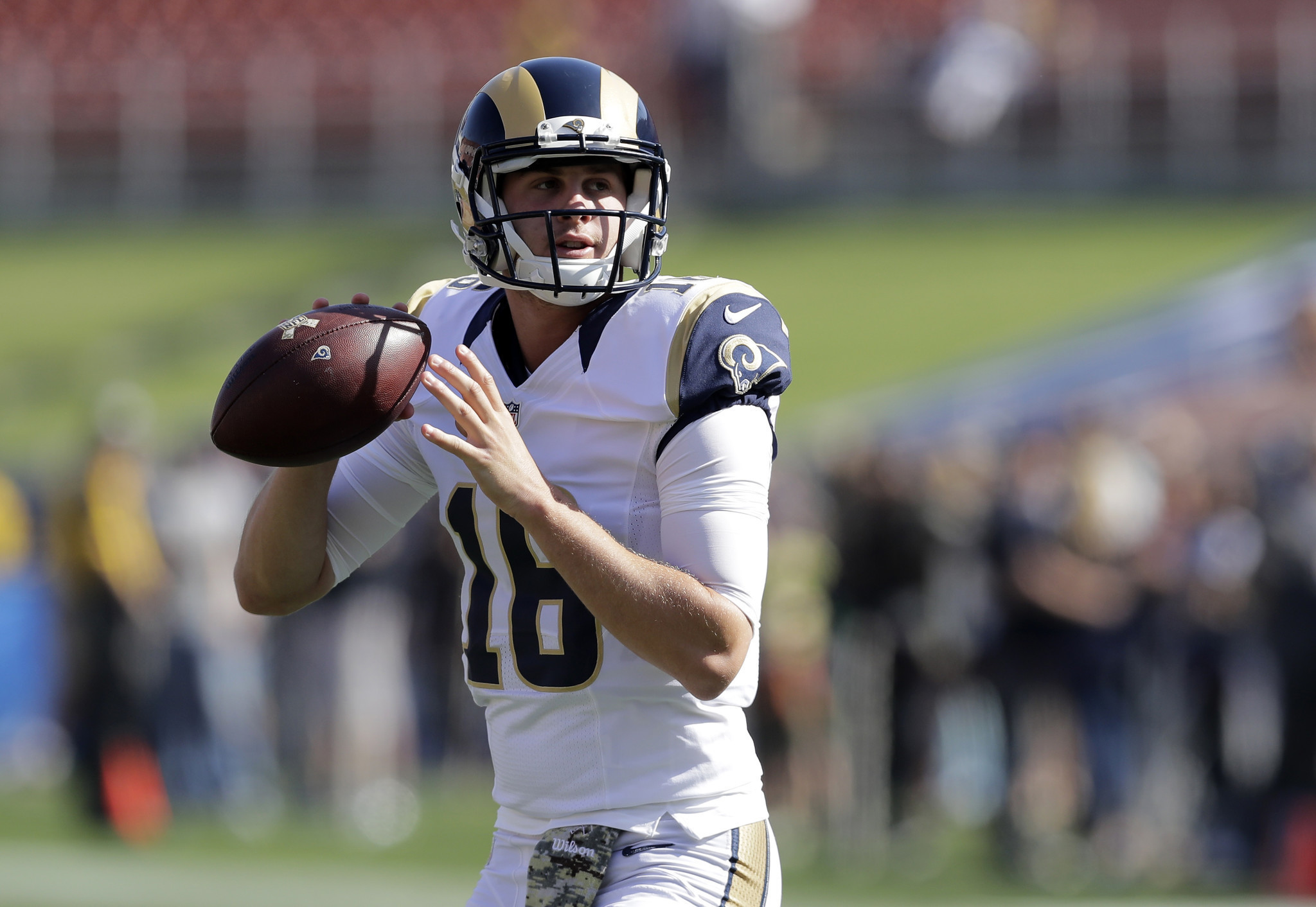 Years ago I read an article about how if you post a poor QBR in your rookie season, you are pretty much destined to not succeed in the NFL. While I believe it is foolish to write off the potential of anyone’s career after a rookie season, the evidence was pretty damning. Unfortunately, despite my best efforts, I cannot find this article to reference here.

But I want to use the fundamental principal that the article outlined to lay context for how remarkable Jared Goff’s turnaround has been after 8 games in 2017.

It’s not that Goff was bad last year, it’s that he was horrendous. In 2016, Goff ranked 34/34 in DYAR, DVOA, and QBR of all passers that threw a minimum of 200 passes, and it isn’t even close. Expanding the list to any quarterback that threw at least 10 passes in 2016, Goff still ranked last in DYAR and DVOA by a mile, and most of the worse QBR performances were produced on a very small sample of passes for each individual. Here is a table of all passers with a minimum of 10 pass attempts in 2016 that had a worse QBR than Goff, and how many pass attempts each one threw:

As you can see, basically everyone (except for Petty) threw so few passes you can basically eschew the QBR data. And regardless, this is some bad company to keep. ESPN’s FPI model hated Goff so much that its preseason projection had the Goff-lead Rams to rank 64th out of 64 possible quarterback lead combinations. It actually ranked the Sean Mannion-lead Rams ahead of Goff’s Rams.

And the hits keep on coming. Before 2017, FootballOutsiders did a series ranking the best and worst quarterbacks in multiple categories from the 2006 season. One of those categories was an accuracy metric FO created called C%+. The worst C%+ mark in the history of the data (since 2006) over the course of a season with at least 400 pass attempts belongs to 2014 Blake Bortles with a mark of minus-6.8 percent. Jared Goff only threw 230 passes in 2016, so he did not qualify, but on those 230 attempts Goff’s C%+ was minus-10.1 percent, blowing Bortles’ mark out of the water. More so, Goff’s teammate Case Keenum posted a QB EPA of minus-33.2, which ranked 30th. Goff, who did not qualify for this metric either, posted a minus-71.9 EPA in his seven starts.

One metric Goff did qualify for was ALEX, which measures how short of the first down marker a quarterback throws the ball on third down. If you throw the ball three yards in the air on third and ten, your ALEX is minus-7. Goff was dead last in the NFL last season with an ALEX of minus-2.5.

It’s not just that Goff was bad in his rookie season, it’s that he was historically terrible.

Fast forward to 2017, and Jared Goff is not getting the MVP consideration that he rightfully deserves.

Here are Goff’s ranks in some of the most prevalent quarterback categories:

The Rams offense is 9th on DVOA and 1st in points per game. The Rams are first in DVOA and first in +/-. Goff is the one quarterbacking said Rams.

Bill Barnwell recently selected Carson Wentz as his midseason MVP. In an MVP poll on ESPN, 8/9 respondents selected Wentz as MVP, with the other vote going to Brady. Carson Wentz, rightfully so, is garnering a large amount of MVP support in the media. How does Goff stack up against his draft-class-mate? Quite well.

If Cooper Kupp caught the week five would-be-game-winning-touchdown against the Seahawks, the Rams are sitting at 7-1 and the national media is debating Wentz vs. Goff for MVP.

Last week I pontificated aloud regarding midseason NFL awards and embarrassed myself. I suppose it’s an occupational hazard.   Anyway, my biggest regret is that at that point in time I did not bring up that Goff should be garnering MVP chatter. He would not get my vote if the season ended today, but he belongs in the conversation at present. The Rams face the 5th most difficult schedule for the remainder of the season so perhaps Goff cools and the Rams stagger to a 10-6 finish after a 6-2 start. It doesn’t matter, because the important fact is after a disastrous rookie season that must have had Rams fans fearing an RGIII-esque debacle, Jared Goff has completely changed his career trajectory in unprecedented fashion.

The odds Goff takes home this award are minuscule (but just hand him most improved now). However, the fact that I can sit here and make this argument after what happened in 2016 is incredible. I really think Goff’s rookie season should be viewed as more of a redshirt season or akin to a baseball player who didn’t log enough at bats or innings pitched to qualify for his rookie season. What a mess that situation was between Gurley enduring a sophomore slump, Jeff Fisher running a prehistoric offense, Jeff Fisher getting fired midseason, the offensive line being putrid, and the offense actually attempting to use Tavon Austin as a viable receiving option in the passing game. Let’s just consider 2017 Goff’s rookie season, or redshirt freshman season, and marvel at how well he has began his career.

[…] I’ve previously spoken about the turnaround of Jared Goff.  Todd Gurley has also enjoyed quite the rebound season.  The Rams are the first team in the Super Bowl era to go from last in scoring to first in scoring the next season.  The Rams led the NFL in scoring without anyone close to Antonio Brown, Julio Jones or Gronk on the roster. I’ve mentioned before how McVay is responsible for Wade Phillips coming to Los Angeles. […]