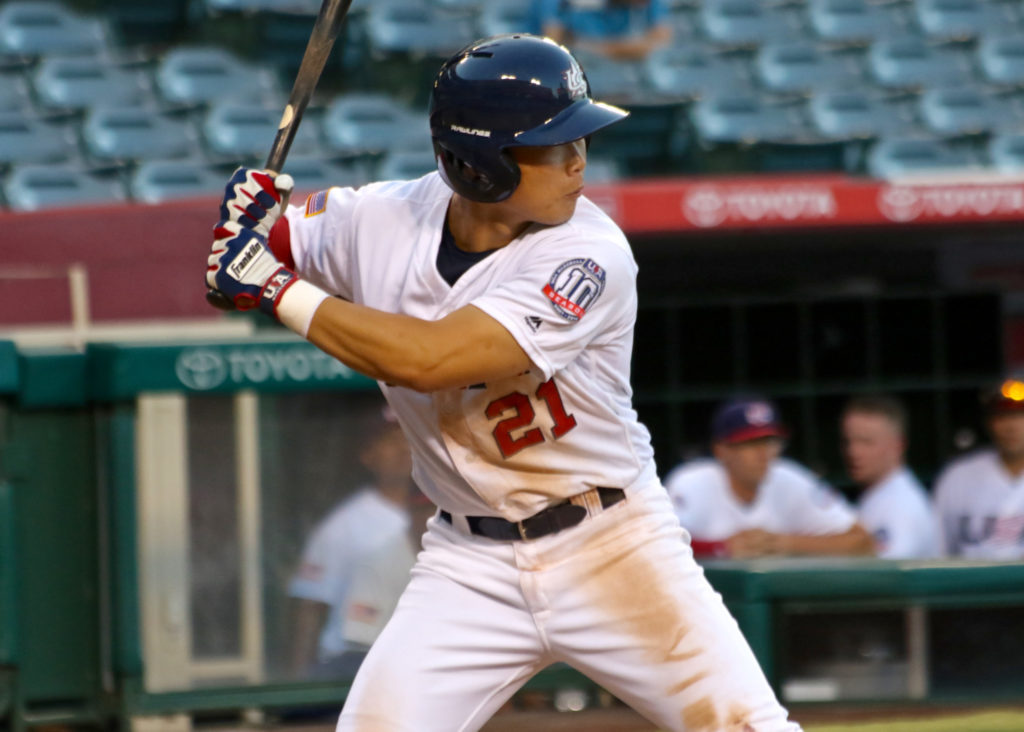 Since prospects in AA and AAA usually get most of the fantasy attention (rightfully so), I thought I’d highlight some prospects who spent 2017 in the low-minors and should be on your fantasy radar going forward.

The Mariners made Lewis the 11th overall pick in 2016, and if not for a knee injury he would likely already be in AA or AAA. Lewis is big, 6’4”, and should be able to generate plus-power in the major leagues. Lewis’s small-college background and subsequent injury have kept him somewhat hidden, this offseason may be your last chance to acquire him at a reasonable price in dynasty leagues.

Hiura straight up mashed at UC Irvine before being taken 9th overall in this year’s draft by the Brewers. Hiura didn’t stop hitting in his short professional stints either, posting wRC+ marks of 240 and 138 in Rookie Ball and Low-A, respectively. Fangraphs’ Eric Longenhagen has stated that he thinks Hiura has the bat to become an all-star. Hiura is a potential stud at the keystone, one of the weakest fantasy positions.

“Robert has the talent of a first-round pick if he were in the draft. After he signs, he should be ready for an assignment to a low or high-class A affiliate. He has a strong, lean frame at 6-foot-3 with broad shoulders, a wide back and quick-twitch athleticism. A right-handed hitter with excellent bat speed and a sound swing, Robert has plus power with room to continue filling out and increase that in the future.“– AthleticsNation.com

…he body has yet more room to grow. As a result, I have plus raw projected at peak and I think the hit/power combination (both projected to above average in games) is comfortably playable in an outfield corner when coupled with Soto’s ability to reach base. He’s a potential plus regular…” – Fangraphs.com

“There are scouts who think Taveras might grow into 15-plus annual homers, too. He hit for more power this spring (including an opposite-field grand slam during an intrasquad game as a right-handed hitter) and is going to play all year in full-season ball as an 18-year-old. This is a potential star.”- Fangraphs.com

This trio of toolsy OF’s are all a good ways away from the MLB right now, but they all also have the talent to shoot through the minors à la Rafael Devers, Victor Robles, Ozzie Albies, or Ronald Acuna. Robert is probably the best power bet, followed by Soto, and then Taveras. Taveras is likely to produce the most MLB stolen bases, followed by Robert, and finally Soto. With the rate homeruns are getting popped in the Majors, it’s tough to get a feel for exactly how their power will play, but each of them is talented enough to produce at least MLB average power. My fantasy ranking of the group is Robert, Taveras, Soto.

Robert has shown power and speed in the minors, he’s also the oldest of the group and faces little chance of being blocked at the MLB-level since the White Sox are in the middle of a rebuild.

Taveras may have the most special bat-to-ball skills of the group, and definitely has the best legs, he also struggled with the bat in A-Advanced at times this year, and will need some time to put more polish on the bat. His defense alone, though, could be good enough to carry him to the MLB.

Soto managed to walk 14 times and strike out only 9 times in 123 plate appearances across two-levels this year. That in itself is a feat for an 18-year-old. Soto isn’t as special a player as Victor Robles, but Robles’ popularity has helped hide Soto from the masses. I doubt the Nats will move Soto as quickly as Robles, but with the Jayson Werth’s career coming to a close and Bryce Harper possibly leaving town, Soto is someone to keep an eye on.