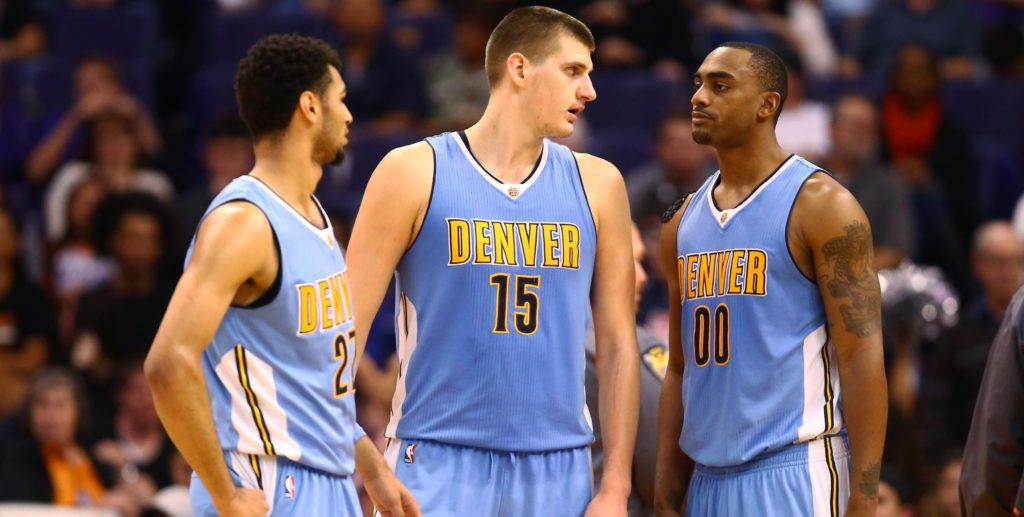 Make sure you check out Rosenberg’s Western Conference projections.

OVER. You get it.

OVER. I really like what Houston did this offseason. The two guards on the NBA All-Defensive First Team for 2016-17 were Chris Paul and Patrick Beverley.   Statistically, Paul grades out better than Beverley does. And while they are comparable shooters, Paul is the better passer, court leader, and free-throw shooter. This team won 55 games last year; I expect them to push 60 this year.

OVER. We hear a lot of “process” talk surrounding the Sixers, but the Spurs are the process OGs. They really should have trademarked “The Process” a long time ago because all they do is win. Active Spurs player, and personal favorite, Dejounte Murray WAS BORN during their last losing season. With Kawhi Leonard and a strong supporting cast the Spurs’ winning ways will continue.

UNDER. You have to like what the Thunder did this offseason. Sam Presti’s grand experiment to take down the Warriors probably isn’t going to work, but it has created some must watch TV, and an excellent narrative for those following the Thunder this season.   Overall I expect the Thunder to be more “good” than “great”. Ultimately, they will be a dangerous team come playoff time, but I’m not sure the Thunder are going to pile up wins like some expect. I have major concerns regarding Carmelo Anthony’s role on this team, so far in his NBA career he hasn’t shown any willingness to adapt his game to his teammates. Say what you want about his teammates, but Carmelo couldn’t get the Knicks to the playoffs in any of the last 4 seasons. The Knicks play in the Eastern Conference, in case you forgot. Furthermore, the 2016-17 Knicks actually played better with Carmelo OFF THE COURT. THESE GUYS performed better without Carmelo.

OVER. Quietly, the Nuggets have assembled a very solid team. The young trio of Jokic, Murray, and Harris will be even better this year. Nikola Jokic has been his usual dime-dropping self in the preseason. Now with Paul Millsap, the Nuggets should take a big step forward this year.

UNDER. I think I can buy in to the notion that Tom Thibodeau and Jimmy Butler get a little more D from Andrew Wiggins and Karl Towns. I don’t think it will be enough defense to get the Wolves to 49 wins. The Wolves bench isn’t all that deep, and Thibodeau already likes to run his starters into the ground. Taj Gibson, Nemanja Bjelica, and Cole Aldrich will be soaking up all the non-Towns big man minutes. This isn’t a good thing.

OVER. While this team may have less star-power, it does have enough quality pieces to get itself to the first round of the playoffs

OVER. The Blazers aren’t materially better and/or different than they were last season when they finished 41-41. I think Lilliard and McCollum can carry the Blazers to 43 wins.

UNDER. Anthony Davis + DeMarcus Cousins is basically an impossible matchup for every other NBA team. If everything clicks the Pels could be a lot better than everyone expects. I’m not going to bet on that though. It’s also tough to place any kind of trust on the Big Two’s supporting cast. Jrue Holliday is making over $25 million this season, the Pelicans are going to need him to play like that kind of player if they are going to get somewhere.

UNDER. Gordon Hayward’s usage rate was north of 27% last year. George Hill posted a nearly 24% usage rate, granted he played only 49 games. Though they should still have a solid defense, and I like some of their offensive pieces, they have a lot of work to do to refocus this offense. I’ve been a fan of Quin Snyder since his days coaching Kareem Rush at Mizzou, so I trust him to get the most out of this team, I’m just not sure they have the firepower to truly compete in the West.

OVER. Dennis Smith! The guy is already getting Rookie of the Year attention. The Mavs will have some nice guard depth once Seth Curry returns from a stress fracture. Harrison Barnes was able to maintain his efficiency despite taking about 40% more shots in his first year as an offensive focal point. I can’t not mention Dirk, the guy turns 40 next June and is still an asset on the court. It’s hard to imagine that when Dirk first began his NBA career he was one of only a few big men who could shoot. Now every big man wants to be Dirk.

UNDER. James Ennis, JaMychal Green, and Brandan Wright are fine players, but there going to be getting big minutes on this team. Chandler Parsons is now 29 and it looks like he’ll never be the player he once was. Mike Conley and Marc Gasol are now both on the wrong side of thirty. I just don’t see how they do it this year.

UNDER. Brook Lopez got traded to a team that is basically an advanced version of the 2016-17 Nets. I guess that pretty much sums up what I think about the Lakers this year. The Lakers should be a fun team to watch with plenty of interesting pieces. Maybe Kyle Kuzma becomes that piece from nowhere that pushes the Lakers’ timeline forwards.

UNDER. The Kings won 32 games last year and had Demarcus Cousins for most of the year. The Kings roster is deeper, and the locker room is a more pleasant place, but it will be tough to replace all the concentrated on-court value they were getting from Cousins.

UNDER. Devin Booker is the perfect embodiment of this team: an inefficient but sometimes tantalizing offense with little to no defense.

[…] Continuing our three part series, K and I will be predicting the final standings for the Western Conference and whether we would take the over or under for each team’s win total.  Make sure you check out K’s projections as well. […]