The NBA has decided to take a less than full step measure to fix the All-Star game.  After the normal player selection process forces an even number of players from each conference to get the All-Star designation, the leading vote getters from each conference will be named team captains and proceed to draft their teammates.  The NBA is already the most melodramatic league we have in the country (LeBron vacations for two weeks in the middle of the season, Kenyon Martin criticizes a Chinese guy for having dreadlocks while Kenyon Martin has Chinese tattoos, everyone complains they don’t touch the ball enough, NBA Twitter, Kevin Durant’s fake Twitter, if you missed a shot it blows your mind the ref didn’t realize you were clearly fouled, flopping, the inability for anyone to realize if you took five steps then yes, you traveled) and now we get a process that is going to have the potential for last-kid-picked-in-gym-class awkwardness/embarrassment.  Awesome.

Full disclosure: I am a Laker fan.  However, I don’t think you need to be a Laker fan to find the upcoming season interesting.  I know that every player in the history of sports has showed up to camp in the best shape of his career, but that is truly the case with Julius Randle.  This may not seem like much but Randle has all the tools to be a perfectly average player.  He is very good as a transition distributor for his position, he has the athleticism to be a switch defender, and despite his lack of length he can still be a bully.  Brook Lopez is going to provide Randle with the most space he has ever had to work with down low.  And oh boy, this front court situation.  Brook Lopez does a lot for this team: creates space with his shoting, can take advantage of being given space down low, and is a very good passer.  These attributes help the Lakers youth movement of Ball, Ingram, Randle and Kuzma.

This is just the beginning of this fascinating front court.  In the era of smallball, pace and space basketball that has moved almost entirely away from traditional bigs, the Lakers have stocked up on three true 7-foot centers with Lopez, Bogut and Zubac.  Why?  What are they planning?  How will they stagger these minutes?  How do they pair these guys with their counter-parts at the four?  Randle, Nance, Loul Deng and Summer League GOAT Kyle Kuzma all require time at power forward.  If the Lakers want to go really small they could play Randle or Nance at the five as well.  Kuzma seems to have the athleticism to serve as their back up small forward when Ingram sits.  Can they feature Deng at all to the point where anyone in the NBA will think “maybe we can use that guy for the playoffs?” (looking at you, half of the Eastern Conference).  Will Randle show off enough spunk that his trade value will swindle someone into taking on the Jordan Clarkson contract?  Why does any of this matter?

Because the Lakers, as of now, will have 47 million dollars of cap space in the summer of 2018.  To pull off the double max coup the Lakers are eyeing they need to come up with about 65 million of space.  Shedding Deng’s contract basically gets that done itself.  Ridding themselves of the Clarkson contract gives them enough space to sign two max guys with Randle’s cap hold on the books, and subsequently keep Randle around if they’d like (assuming they use some other sweeteners to move Deng and Clarkson in such a scenario).

Speaking of those two max guys, the development of Lonzo Ball and Brandon Ingram are going to have a large impact on if anyone (aka, Lebron and George) want to team up in LA while reasonably prognosticating they have a chance at winning a title.  Plus, Lonzo is just going to be so fun to watch.  I seriously cannot wait for every Laker, Clipper game so that Lonzo and Milos can dual for the title of best-passer-in-Los-Angeles. 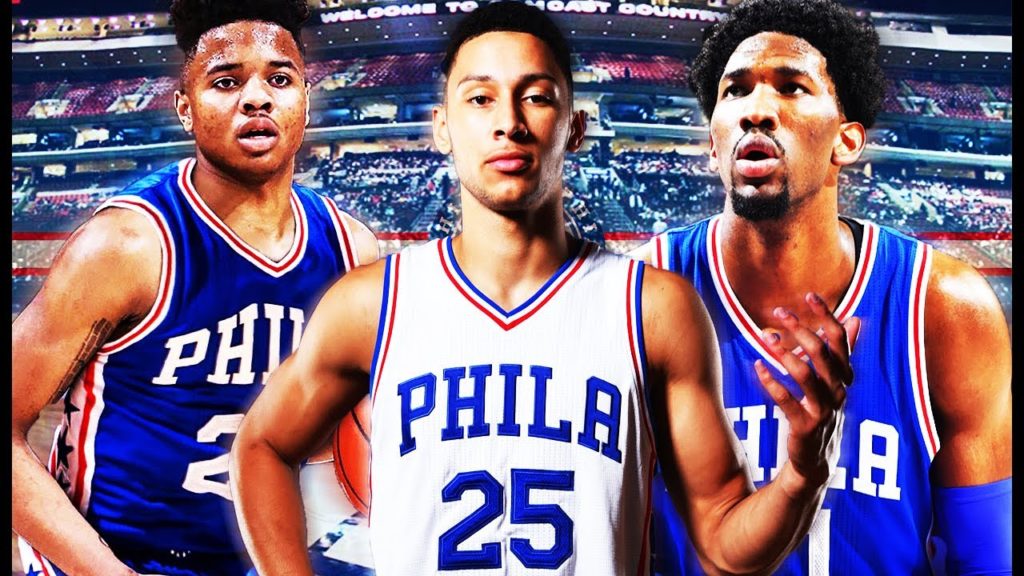 The Philadelphia 76ers are -220 to make the playoffs.  Philly is tied for the 4th best odds to win the Eastern Conference.  Think about that.  They fall ahead of the Heat.  And they have this guy:

I’ve been waiting for this for four and a half years.  In three consecutive lotteries the Thunder drafted Kevin Durant, Russell Westbrook, and James Harden.  All Sam Hinkie wanted to do was maximize his odds of striking similar lottery gold and it earned him a pitch fork mob running him out of town.  Well, four and half years later and the 6ers, in consecutive lotteries, have accumulated Joel Embiid, Dario Saric, Jahlil Okafor, Ben Simmons, and Markel Fultz.  The 76ers are setting the single season record more largest increase in League Pass intrigue.  Embiid, Simmons, and Fultz make for the most tantalizing young trio in the NBA.  We have no idea what the 6ers will be this year.  Embiid, Simmons and Fultz have combined to play 31 career regular season games in the NBA.  If we get 50 games of Embiid we should consider ourselves lucky.  Simmons and Fultz are more likely than not going to really struggle on defense and debatably contribute to winning basketball.  There are still questions of how much shooting this team has even with the Redick signing.  Who cares?  The flexibility Ben Simmons gives Brett Brown with his lineups is fascinating.  Will he start Simmons at the 4, even though it will crowd the floor for Embiid to work in the post?  How much will he run Simmons at the 1?  How much will he run Simmons at the 1 and have Fultz play off the ball?  Will Simmons be the back-up wing when Covington needs some rest?  How many minutes will we get to see Simmons, Saric and Embiid all on the floor?  I cannot wait to find out these answers.

Pick a Melo, any Melo, and I will watch.  While we can all agree we no longer are tuning in to watch peak Melo, this is by far the best NBA team featuring Anthony.  The big three of Russ, PG13, and Melo is must watch television.  Each of these guys were top ten in ISO scoring last season.  I mean, really, doesn’t this say it all?

However, I do believe the three of them will find a way to mesh.  Paul George is perhaps the easiest player in the league to slot next to someone and let them just figure out the proper balance.  If Westbrook struggles on a given night George can carry the offense.  George also doesn’t need the ball, as he is perfectly comfortable and efficient at moving without it.  PG13 may have complained that he needed the ball at the end of the game during the first-round loss to Cleveland, but if he didn’t murder Lance Stephenson for dribbling the air out of the ball and not swinging it George’s way enough, then my educated guess is he won’t get into any rifts with Westbrook.

You’ve probably read by now how Olympic Melo is a much different player than NBA Melo.  He isn’t as ball dominant, he doesn’t force bad shots and is much more efficient.  I really do believe this is the Melo we are going to see in OKC and it is going to be awesome.  Put him at the 4 at three point range and he creates a lot of space for Russ to drive and either attack or kick.  Try to man him with a small ball 4 and Melo is going to feast on him in the post.  How many transition 3s is Melo going to hit this year as a result of Westbrook running 8 trillion miles an hour at the other basket, drawing anyone that ran back on defense, and leaving it for Anthony in perfect rhythm?  How efficient are all three of these guys going to be now that they don’t have to single handedly carry the offensive burden?

But the parts around them create their own intrigue.  Adams, Roberson, Tucker.  Any lineup the Thunder trot out will have a huge liability on one side of the floor.  Either Melo is going to be getting killed defensively, or Chris Paul/everyone is going to be 20 feet away saying, “hell no!” when Roberson lines up to shoot.  In the normal world, a team with 55-win talent that has one player as a liability on one end of the court is a title contender.  In the world where the Warriors overlord the NBA, it means you have absolutely no chance.

How they matchup with the Warriors is so interesting to me.  If you were in a laboratory with the goal on constructing a human being to guard Kevin Durant, you would probably create something that looks a ton like Paul George.  It also really helps that he won’t have to carry this offense and can put his all into that defensive assignment.

What is the closing lineup going to be?  At this point Melo must be a power forward at the most crucial time in a game.  However, that means your best potential offensive lineup (Westbrook, George, Melo, Patterson, Adams) can’t be on the floor.  The best defensive lineup (Westbrook, Roberson, George, Patterson, Adams) leaves a complete 0 on the offensive end, and, well, it doesn’t involve Melo.  How will Billy Donovan handle this?  Will Donovan roll out Westbrook, George, Melo, Grant, Patterson against the death lineup to be super switch-y, maximize shooting, and try to hide Melo on Iggy?

And obviously the most important aspect; do these guys love playing together so much that George and Melo decide to come back, AKA are my Lakers going to get Paul George or what?

I mean, come on.  When you have the greatest team ever assembled you are going to be the most interesting story in a season.  I suppose you could argue this just makes them boring, but watching them is the opposite of boring.  I willingly watch all 48 minutes of a Warriors’ blow out.  This is special, this is something I want to see as much as I can before it comes to an end one way or another.  This team is just unfair.  Will they rank first in both offensive and defensive efficiency?  Will they accidentally set the wins record despite not chasing it and actively looking for loopholes in the new anti-rest rules?  How much are they going to stick their noses up at the rest rules and rest players anyway? How dominating will they be through the entire season now that they don’t have a mandatory get-used-to-Kevin-Durant-period to start things off?  Will they set the all-time single season point differential?  Will Steph and Durant be the first teammates to post 50-40-90 seasons?  What crazy dimes will Shaun Livingston drop?  Will Swaggy P get jealous and launch 35-foot 3s because he thinks that’s cool around these parts?  Tune in to find out.

[…] I am super excited to watch the 6ers this season, but any reasonable prediction has to be the under here.  If Embiid goes down the odds of hitting […]

[…] really wanted to put the Pelicans on my list of most interesting stories for this upcoming season but elected to go with the All-Star game gym class draft instead.  Last season the Pelicans went […]